The Case For Arming The Troops

Learning of the murders of the four Marines and one sailor in Chattanooga, Tennessee, was heartbreaking for me as an … Continued 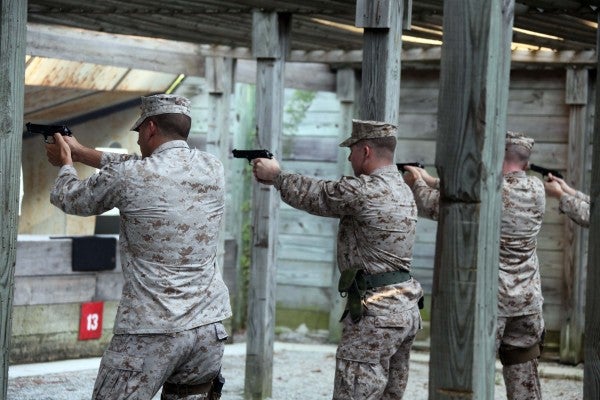 Learning of the murders of the four Marines and one sailor in Chattanooga, Tennessee, was heartbreaking for me as an enlisted infantry Marine veteran of the Iraq War. Then learning that authorities are investigating the incident as an act of terror is equally painful to bear.

The thing that really bothers me as a former Marine Corps combat veteran is that these service members who were murdered by an apparent act of Islamic Fundamentalism are our nation’s active duty “armed forces,” but they were not allowed to be armed or have the ability or opportunity to protect themselves with proportionate force.

This is because of a Department of Defense directive written in 1992 and reissued in 2011 that bars military members from being armed unless it is part of their official job duties, like law enforcement. This is ridiculous to me, and seems to defy common sense. How is it that our armed forces are not allowed to be in fact armed forces? These are trained individuals who know how to operate incredibly complex weapons systems that we send all over the world to use, but we have policies and laws in place that prevent them from having access to even the most basic weapons on their persons back here at home. In a day and age where we are experiencing radicalized “lone wolf” terrorist attacks, it would seem that we should focus on our men and women in uniform having the opportunity to protect themselves.

In fact, the Military Times has reported that the commanding officer at the Navy Operational Support Center, Lt. Cmdr. David White; and one of the slain Marines had personal weapons at the time of the shooting, and returned fire. It’s unknown if either man struck the shooter, pending the autopsy; but they were able to defend themselves and possibly helped save lives and repel the shooter. In doing so, in having those weapons, they risked reprimand.

I cannot of think of one good reason why we would not come together to support arming our armed forces in order to make them less of a soft or easy target for terrorism. In the military we call this creating a “hard target.” In this case the opposite is true. This terrorist had a soft target to attack these Marines with no consequence or warning of consequences. In contrast a sign on the front door of the recruiting station instead acted as an invitation to a soft target and gun free zone. For terrorists this is a green light for them to take advantage of a situation like this, especially if they are hell bent on killing some Marines.

It is my firm view that there is no good reason why we should not allow our trained armed forces to be armed and ready to fight, even when they are not taking the fight to an enemy, but to be ready whenever the fight comes to them. During my tours in Iraq there was a sign posted everywhere we went. In the dining halls, at the combat outposts, on the port-a-potties, in bold black spray painted letters, the sign read, “Complacency Kills.” Back in the states, our policies mandate complacency. It is the failure of leadership that has mandated these Marines could not be armed. I wonder what has gotten us to this point to where we fear arming our own service members.

When I was on active duty, a great leader, Marine Gen. James F. Mattis said the maxim all Marines should follow is to, “be polite, be professional, but have a plan to kill everybody you meet.” This is the attitude that our Marines and all service members must carry when they are in and out of uniform. The attack in Chattanooga is just another affirmation that no matter what, there will always be somebody who wants to harm our military, and for that reason we must not ever get complacent. I am not interested for the purpose of this writing to point fingers. I am sure there will be plenty of that going around. I am simply advocating for our active duty and reserve armed forces to be allowed to be armed. Many feel they lose their voice on things like this when they join the service when it comes to policies and laws like this that to me, defy common sense, and debar them the opportunity to protect their own lives.

We have a vested interest as a nation in seeing to it that these men and women who wear the uniform and swear an oath to protect us also have the ability and means to protect themselves. We cannot afford to lose even one service member to an act of terror. We are nation that was founded by a group of people who believed strongly in the right to bear arms and used arms to secure our nation. As a nation, firearms have been are in our DNA for over 200 years. It is clear that today in the modern America the 2nd Amendment has created much controversy with strong opinions on both sides for limiting access to firearms. It feels as though we’ve become an ultra-sensitive society where it is now common place immediately following a tragedy like this to see movements to slam gun control legislation through or movements to ban things. The simple question I ask myself is why we are not seeing more of a movement to reverse these bad policies that have created soft targets for our military personnel that even they know is not safe for their well-being and goes against their own training.

Two U.S. Congressmen from Tennessee have introduced bipartisan legislation that would require the Pentagon to reverse its directive and allow service members to carry weapons. “Our men and women in uniform must have the ability to protect themselves regardless of where they are serving,” Republican Rep. Scott DesJarlais said in a statement, according to the Hill.

At the end of the day, it is common reason that tells us that individuals like this apparent terrorist are not going to follow the law or the suggestion of a gun free zone sign. They are going to act violently for their own insane reasons no matter what and find the means to carry out their mission. The reasoning behind a terrorist’s mindset shouldn’t matter to any of us regarding arming our service members’ right to protect themselves from these types of threats. What matters is that we should be giving our armed forces the tools they need and a fighting chance to survive an attack like this. They are trained professionals, and they should have the opportunity to return fire when they are fired upon. Marines and other military personnel should be perceived as, “No Better Friend, No Worse Enemy.” We cannot afford to continue this path of letting our guard down. Complacency on the end of our own leadership indeed does kill. Our armed forces deserve better than this.