The Millennial Generation’s Problem With Patriotism

One can only imagine how often student veterans facepalm as they walk across their college campus and see a hungover... 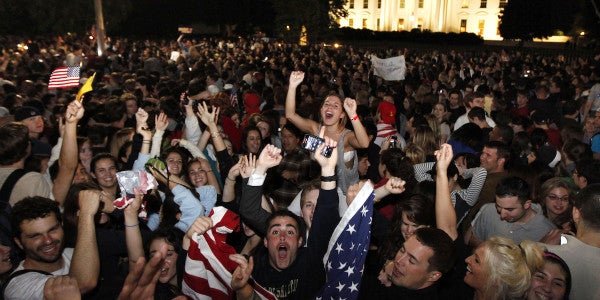 One can only imagine how often student veterans facepalm as they walk across their college campus and see a hungover 18-year-old stumbling out of a dormitory wearing an Air Force pilot’s jumpsuit, a camouflage Boonie hat, and an American flag as a cape. Surely, this kid isn’t trying to impersonate a service member by rocking military garb, but such an occurrence raises the question of whether the wear of surplus military uniforms and the American flag violate the inherent respect civilians should have for objects of such symbolic importance.

The well-known notion of “stolen valor” — which refers to individuals who impersonate service members and their awards — has been a very publicized point of frustration for the military and veterans communities. Efforts made by the media, military, and veterans to seek out these disgraceful people have broadcasted a disgust for fabricated service records to the American public. The culprits who award themselves everything from the Army Service Ribbon to the Medal of Honor are easy targets for ridicule because of their blatant disrespect and egocentric actions, but what about the more subtle disrespect of American symbolism?

Contemporary American trends, especially among the millennials, have found an obsession with the wear of beloved “Old Glory.” Its colors fly across the world representing the values of the American people, and remind so many of us of the sacrifices made by countless Americans for those values and our freedom. With that being said, I am frequently flabbergasted at how often it ends up on the board shorts of a myriad of college drunks. The adaptation of the American flag into college-fraternity attire confuses me, and has led me to scold many of my classmates for their disrespect. The kicker? They think I’m being unpatriotic.

The first time I noticed this trend catch on was while watching televised coverage of the White House gates on May 2, 2011, immediately after the raid that led to the death of Osama bin Laden. Patriotic young Americans gathered outside chanting “U-S-A” (another pet-peeve of mine, unless it’s the final five minutes of the movie “Miracle”), and waving American flags. While this historical moment gave Americans a moment of resolution after the tragic attacks on 9/11, it also seemed to be the catalyst for ostentatious patriotism. The publicized celebration after bin Laden’s death — which raises plenty of moral questions itself — made such behavior seem acceptable to America’s youth.

The same “U-S-A” chant can now be frequently heard in the basement of my old fraternity house after a fierce round of drinking games. The gravity that I assume young Americans once felt for our nation, its flag, and its military has been reduced to a shallow interpretation. What was once patriotism is now a fashion statement for all the wrong reasons. We must ask how the trend gained traction, and why so little has been said or done to correct it.

Wearing an old uniform or a star-spangled bikini for a party is undoubtedly harmless and probably offends very few people. However, such an enormous public display of patriotism or attention-seeking (which is sure to end up on social media) exposes the underlying trouble with the millennial generation. We are stereotyped as egotistical and spoiled for taking our parents’ hard work for granted. Society also believes us to be sheltered, which could easily be the reason for our ignorant and flamboyant behavior when it comes to respecting and celebrating our country.

The use of American symbols has become nearly synonymous with the lifestyle of the 1% on college campuses across America. If any of my friends actually went to a funeral with military honors, I like to believe they would later think twice before naming the upcoming party “Operation: Obliteration,” or making a fraternity pledge run around the block naked waving an American flag.

A humble and respectful approach to showing one’s patriotism among young Americans seems to be lacking. For many millennials, Old Glory now represents the freedom to drink on weekdays and spend their parents’ money. With this set of “lofty ideals,” military surplus sure does sound like a great party theme. It’s no surprise that the normal occurrence of a drunk student sporting military surplus and an American flag cape is only the tip of the iceberg when it comes to complicated situations involving the wear and misuse of the American flag and military uniforms.

While it would be ridiculous to restrict the wear and use of the flag through the enforcement of Chapter 1 of Title 4 of the United States Code, it might be an appropriate time to begin a veteran-led conversation about the misuse of such symbolism and the direction of our youth’s perspective on service. Contrary to popular millennial beliefs, chugging a beer on top of a yacht while holding an American flag does not positively reflect the values and ideals of the American people or effectively thank veterans for their service. Rather, it simply reflects my generation’s ignorance.

There is something inherently different and alarming about my generation, but it has become evident that we have a tremendous amount of energy and passion. My hope is that we can convert our gaudy display of patriotism into a genuine desire to serve and create positive change in the United States. The voice of veterans and service members is essential to the millennial generation’s task of reinventing its sense of patriotism. Bright young Americans are needed to fill the ranks of our military and serve in numerous other public-service capacities that can be inspired by their love for country.