UNSUNG HEROES: The Army Paratrooper With A Silver Star And 3 Purple Hearts

The central Iraqi city of Samarra was subject some of the fiercest fighting of the war, and Brennan Goltry has... 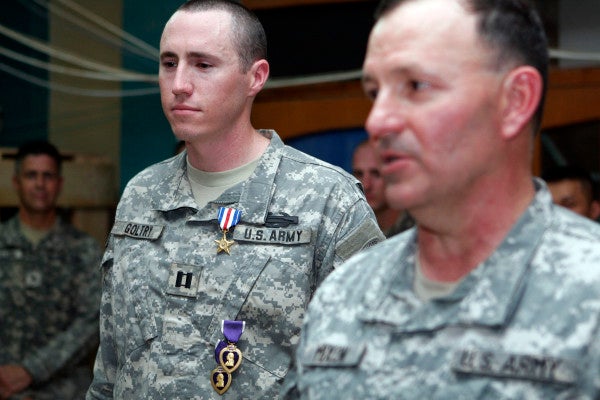 The central Iraqi city of Samarra was subject some of the fiercest fighting of the war, and Brennan Goltry has the scars to prove it.

In February 2007, the then-Army captain assigned 2nd Battalion, 505th Parachute Infantry Regiment was on a routine mounted patrol in Samarra when he fell into an L-shaped ambush at the hands of the enemy, according to a U.S. military report.

Legendary war correspondent Sebastian Junger once described an L-shaped ambush thusly, “Correctly done, a handful of men can wipe out an entire platoon.”

As Goltry’s five armored humvees progressed south in Samarra under the cover of darkness, they fell right into such an ambush. They took heavy sniper and heavy automatic fire, and their lead vehicle was immediately incapacitated. Goltry dispatched of several insurgents and evacuated his men. He was shot twice in the firefight.

Despite his wounds, he continued to engage the insurgents and evacuated his men from the kill zone via foot.

For his actions that February day, six months later, Goltry was awarded the Silver Star medal, the nation’s third highest award for valor, as well as a Purple Heart medal, given the nature of his wounds.

“I’m real proud of my men,” Goltry said at the time. “They fight real hard for me, and they’ve saved my ass more than once.”

Goltry was also nominated for a Purple Heart medal for wounds received in May 2007 in Iraq. That would make three Purple Hearts for Goltry.