UNSUNG HEROES: A Tribute To One Of The Toughest Marines I’ve Ever Served With; Wounded, But Not Fallen

On Aug. 9, Marine Staff Sgt. Brandon Dodson was on a foot patrol as an infantry squad leader with 1st … Continued 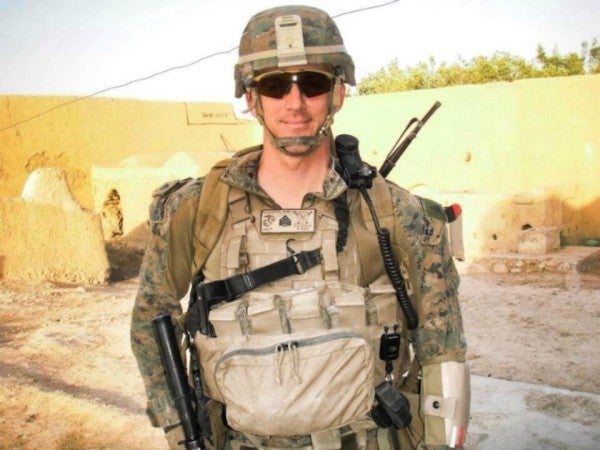 On Aug. 9, Marine Staff Sgt. Brandon Dodson was on a foot patrol as an infantry squad leader with 1st Battalion, 7th Marines in Helmand province, Afghanistan, when an improvised explosive device detonated in close proximity to him, taking off both legs, fracturing his pelvis, and causing other injuries including a broken tailbone and broken right hand. He has been amputated above the left knee and below the right knee, but is out of surgery and is in stable condition at this time.

Dodson is one of the toughest Marines I have ever served with and never understood the meaning of the word “Quit.” He was seen giving a thumbs up to his squad as he was loaded on the casualty evacuation helicopter.

A decade ago, Dodson and I were shoulder to shoulder in one of the fiercest and deadliest battles of the war in Iraq. We both emerged without a scratch. We deployed together again the following year, before I left the Marine Corps and he re-enlisted as a drill instructor at the Marine Corps Recruit Depot, San Diego. Dodson was that guy who was always beside me in Iraq. And now, exactly a decade later, he is on his way to a hospital in Germany where he will have to undergo multiple surgeries before learning how to walk on prosthetic legs.

My previous article about the about the battle for An Najaf in 2004 left off with the 1st Battalion, 4th Marines pulling out of the cemetery so that we could conduct specific targeted raids on Mahdi strongholds at the time and place of our choosing, rather than fighting the militia on their chosen ground. Over the course of the next few weeks, we conducted numerous direct action raids, were caught up in some of the biggest ambushes of my life, and continued to conduct patrols and fight through the streets and buildings of Najaf and Kufa.

On one specific raid after hitting a schoolhouse — which was suspected to be an enemy weapons storage point, but turned out to be a dry hole — we began taking mortar fire right as we were starting to leave. We conducted a headcount and moved out in convoy down the road back toward base. Unexpectedly, as we crossed a large open field about 200 meters from the school, we began taking accurate and intense hostile small arms and rocket fire. Dug-in machine guns had opened up on us and I could actually hear the bullets ping against the armor on the side of our seven-ton truck. I was on the opposite side and had never heard gunfire this intense, so I actually stood up from the bench seat and turned around to see what looked like “Star Wars” lasers coming at us from three or four positions in the field.

My team leader almost immediately slapped me on the back of my helmet and told me, “Sit down, idiot! You trying to get yourself killed?!” Just as I sat back down, we began taking fire from my side of the vehicle from buildings and houses along the street. We returned suppressive fire, emptying our magazines and belts of ammunition as we pushed through the kill zone. A couple of Marines next to me were launching grenades from their M-203s. It was so surreal I almost wanted to laugh.

At some point, I went into tunnel vision trying to focus on muzzle flashes in the night while firing from a speeding truck. Suddenly, bullets from my weapon began to ricochet off the concrete wall that had just appeared after we passed the alleyway I was firing down. My team leader slapped me and gave me a look that said, “You stupid boot, pay more attention!”

Just then, the vehicle started to rock violently and there was a thunderous explosion, and then another one, and a third within several seconds of each other. By the time the third one hit, the vehicle was close to tipping on its side from rocking back and forth. I still don’t know whether they were rockets or IEDs or both, to be honest. When we finally pushed through the kill zone and arrived at the main gate of our forward operating base, our vehicle was destroyed. Dodson was right there next to me that entire time. We laughed about it for days after while playing cards in the hooch, in between other raids and patrols.

This most recent deployment was Dodson’s fifth, having served twice in Iraq and twice in Afghanistan. Dodson and I spent many nights together kicking down doors in Iraq, training the Iraqi security forces, standing guard and conducting patrols. He was always the guy to take a joke too far, but we loved him for it. He is hands down one of the best Marines I have ever seen in combat and is the type of leader who makes the Marine Corps great, upholding all of the values we aspire to.

August is hard enough as it is, having lost numerous friends in Najaf, but to take another casualty a decade later is a sobering reminder that some of us are still very much at war.

A funding page has been set up for Brandon Dodson and his family. The link is located here. Please share this and take a moment to remember all of our troops who are deployed and have been fighting this war non-stop for over a decade now.