This Veterans Day Marks The End Of An Era

“Thank you for your service.” It’s a line that today’s veterans have become accustomed to and to which some awkwardly … Continued 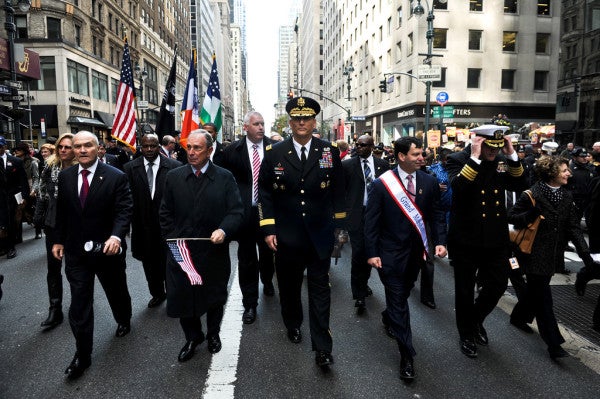 “Thank you for your service.”

It’s a line that today’s veterans have become accustomed to and to which some awkwardly struggle to find a response. It is a well-intentioned expression of gratitude that many in our nation extend to the small percentage of a generation that spent the last 13 years fighting what seemed to be never-ending wars. It is a manifestation of collective societal guilt over how its last generation of veterans was treated. It is an attempt to connect with a section of the American population that is, more than ever, divided from the rest of society due to its small size and isolated installations.

This Nov. 11 will mark the last Veterans Day with combat troops deployed in support of Operation Enduring Freedom. With the world seemingly on fire, it seems naive to think that we will not find ourselves in conflict again in the not-so-distant future. But for those of us who spent our formative years in Iraq and Afghanistan, our wars are ending.

As the wars that marked the post-9/11 era come to a close and we enter a new phase of uncertainty, it’s very possible that the overwhelming support Americans have shown their troops and veterans for the past 13 years will start to wane. Americans, as a people, have a short attention span. Tens of thousands of young Americans remain in Afghanistan today, yet they are a footnote to “more pressing” issues such as Ebola, ISIS, Ukraine, and so on. It is possible to see an America in the next few years where the yellow ribbon magnets come off cars, the beer commercials stop celebrating homecomings, and our troops aren’t recognized at sporting events to mass applause. That’s okay by me. We all volunteered, and most of us serve because we love our fellow soldiers, sailors, Marines, and Airmen and we love our country — not because we expect gratitude.

So what do we, America’s newest veterans, do now?

First, we must let the American population know what happened. The reliance on an all-volunteer military has meant that, while many of us deployed again and again, the majority of Americans have no connection to their veterans. The wars themselves have only briefly caught the public’s attention — short stints of media focus before the rest of the country goes back to whatever else it was doing. For most Americans, Iraq and Afghanistan are what they experienced on CNN or “Lone Survivor.” This is one of the consequences of having an all-volunteer force. If we even want to bridge the growing civil-military divide, veterans must connect with their communities. This serves many purposes, but most importantly, it helps dispel the dangerous myth that all veterans are ticking time bombs riddled with post-traumatic stress. Sharing your stories also helps validate our sacrifices. Taking the time to talk to a civilian about your experience in Mosul or Helmand, or about your friend who was killed, forces us as a nation to put faces to the cost of these wars. As Americans, we must know the price of war if we are to avoid it in the future.

Second, we need to do a better job connecting with other generations of veterans. Just as there exists a civil-military divide,there is also a generational divide between millennial and previous-era veterans. Although our circumstances are certainly different, as a community, we all need to stand in solidarity. There is much to be learned from those who fought almost a lifetime ago, and in turn, if they listen to our stories, we will likely find there is not that much difference between us. Seeking to be active participants in veterans organizations and events in our communities is a good start. We can all learn much from one another.

Third, we must look at ourselves. We are not better than the rest of America because we raised our hands to volunteer in a time of war. Yet, I often see and hear veterans decry those who did not choose to serve or express that they are somehow “better” than the rest of America. Belittling those who decided to go another route is counterproductive and further exacerbates the division between the military, veterans, and society. Yes, what we did was well intentioned, and even noble in many cases, but that does not make us better than those who did not serve. We must look to find ways to connect with society, not build up walls.

Lastly, but most importantly, we must take care of our families, our friends, and ourselves. If we don’t do this, no one else will. While connecting with society is crucial, we have to be our own best allies. We are the ones who know best what makes us tick. With 22 veterans taking their own lives each day, something must change in how we look after one another. Get involved with a veterans organization or volunteer in your community. Call your battle buddy you haven’t heard from in years to find out how things are going. Ask the tough questions when a friend puts up a Facebook post that might signal things are spiraling out of control. Reach out to those who we went through hell with. The act of caring and connecting can make all the difference in the world.

This past weekend, I visited the grave of a friend and classmate of mine for the first time since he was killed in Afghanistan in 2008. Words cannot describe the enormity of sorrow I initially felt kneeling besides his tombstone, but then, after a few minutes, I cleared my eyes and focused on what he sacrificed that I still have — my life. Moving forward, helping each other out in times of need, and making sure that our sacrifices were not in vain by sharing our stories is a critical aspect of being in what some have called “the next greatest generation.”

As we reflect on Veterans Day, let’s be thankful for the majority of Americans who support what we did and try to find ways to understand it. Let’s help dispel the damning myths of PTSD and the narrative of the “crazed vet.” Let’s make our nation stronger as we go forward.

The next time someone stops you and thanks you for your service, this simple reply is all you have to say:

“Thank you for your support.”