Veterans Are Revitalizing The Agriculture Industry

Midway through my second deployment to Iraq, I vowed to eat better; war favors the young, and age was catching … Continued 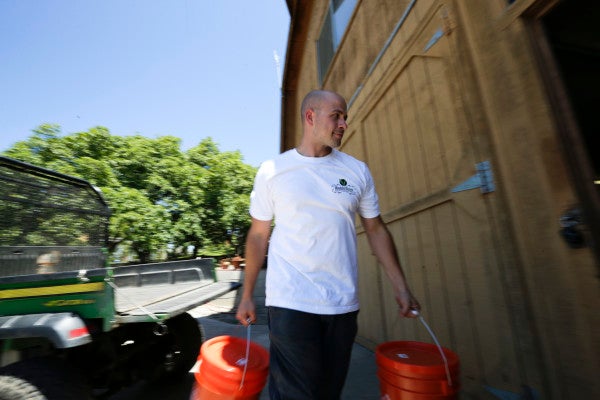 Midway through my second deployment to Iraq, I vowed to eat better; war favors the young, and age was catching up with me. Unlike my 21-year-old soldiers, I just wasn’t getting what I needed out of the food I was eating. The combat zone is hot, the gear is heavy, the resupply convoys I led were long hauls that consisted of changing tires, recovering vehicles, loading and unloading heavy supply. I vowed that when I returned to the United States where healthy food was available, I would start eating as much of it as possible.

However, upon my return from Iraq, the sticker shock of organic food, and the difficulty finding it, kept me from buying a lot. But slowly month by month, I got there; not out of some noble quest, but because organic vegetables, fruit, meat and milk are just simply better for the human body than the pesticide and hormone-laden alternatives. Once I started to eat clean, I just couldn’t go back to the fake stuff — I was hooked. This journey to eat better led me to wonder where this real food comes from. I wondered why it costs so much, who grows it, and why? As I began to slowly find the answers to these questions, I discovered that in fact military veterans grow much of the organic food we consume.

Veterans from the Iraq and Afghan wars have a deep desire to continue to serve and be part of something bigger than themselves. This is illustrated everyday as thousands of veteran-owned and run organizations assist Americans during natural disasters, clean up poverty stricken neighborhoods, help the wounded among them heal, or even help to send fellow vets to college. Each of these pursuits make me proud; these accomplishments are clear indications that we indeed served in the most professional military in the world.

Yet, of the many pursuits listed above, one that rarely gets a lot of press, and frankly isn’t seen as all that sexy, is farming. But I, as well as George Washington, beg to differ; farming is indeed sexy. In fact, our first president considered farming to be one of the highest forms of community service and much like natural disaster relief, farming is vital to our national security and economic health as a nation. In short, we need farmers.

“I know of no pursuit in which more real and important services can be rendered to any country than by improving its agriculture, its breed of useful animals, and other branches of a husbandman's cares.” —George Washington, first American president and combat veteran

There are many reasons why modern veterans choose farming as a way to spend the rest of their civilian lives. I happen to think that the principal reason is because they desire to spend the remainder of their lives, which were surely almost taken from them multiple times, healthy. But beyond this very physical motivation, there are actually many more reasons veterans choose farming as their way to give back and to even heal themselves.

Forty-five percent of today’s veterans come from rural backgrounds. While serving, veterans also become accustomed to tough physical work, long hours and working with little resources; they also find reward in seeing something from conception to fruition. They are excellent planners, welcome challenge, can quickly recover from defeat, and aren’t afraid to take risks. Veterans have also learned through multiple combat tours to be responsible stewards of their finite resources. In combat, they constantly had to figure out ways to operate in very difficult environments with very little; they stretched what they had, and attempted with all of their human capacity to successfully battle the weather, time, and lack of money; all things American farmers do on a daily basis.

The Farmer Veteran Coalition is one coalition connecting veteran farmers with each other. The organization “aspire to lead the national effort connecting veterans to agriculture, and believe that veterans possess the unique skills and character needed to strengthen rural communities and create sustainable food systems for all.”

Archi's Acres is another example of a veteran-farming enterprise that uses hydroponic technology to grow organic produce. Headquartered in Escondido, California, the company is owned and operated by husband and wife team of Colin and Karen Archipley. Colin is a combat-decorated marine sergeantwho founded Archi’s Acres in 2006 with two core objectives: to develop a business that would provide business ownership opportunity for veterans and create a viable sustainable organic produce farming business. In an interview with environmental news site Grist, Archipley said, “Around the turn of the century, about 30 percent of Americans worked in ag. Now it’s less than 3 percent and over half of them are at retirement age or above. So they’re ready to leave the industry. Any time you have a void in the marketplace someone is going to fill it. This is our opportunity.”