It’s a story as old as war itself. A young man leaves home for the military. He trains for war. … Continued 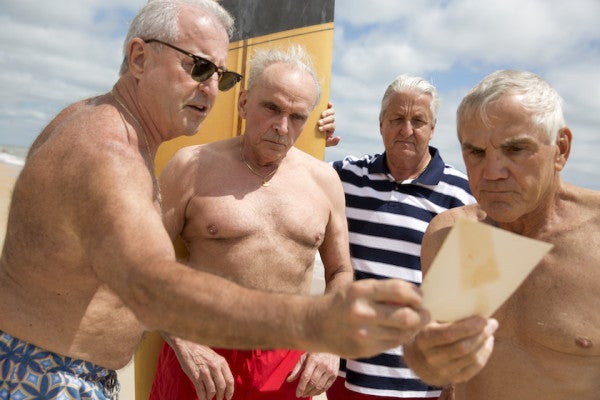 It’s a story as old as war itself. A young man leaves home for the military. He trains for war. He goes to war. He fights, kills, suffers. And through it all, he forges some of the strongest bonds of his life. Then, if he’s lucky, he returns home, and those friendships, like the war itself, fade in the rearview.

On a recent Saturday morning, four Marine veterans convened on a Florida beach to honor a friendship forged during the Vietnam War. Bob Falk, Dennis Puleo, Tom Hanks, and Bob DeVenezia hadn’t seen each other in nearly 50 years. Their mission: to recreate a photo they’d taken together right before shipping off to the jungles of southeast Asia.

In an attempt to recreate the photo taken nearly 50 years prior in May 1966 while stationed at Camp Pendleton in Oceanside, California the four friends: Dennis Puleo, from left, Tom Hanks, Bob DeVenezia (kneeling), and Bob Falk met on Cinnamon Beach Saturday, April 23, 2016 in Palm Coast, Fla.Photo by Luke Franke/Naples Daily News

In the original photo, taken in 1966 on a beach near San Diego’s Camp Pendleton, the Marines, ages 19-21, stand around a longboard with the ocean at their backs. They were fresh out of boot camp, but fully aware of the hardships to come.

“We were all in the same weapons platoon,” DeVenezia told the Naples Daily News. “We were all knew we were going to be cannon fodder, bodies for Vietnam.”

In Vietnam, the Marines were split up. DeVenzia took a bullet to the left shoulder. Puleo almost died of shrapnel wounds. All four experienced the sort of combat they’d expected. And then they returned to make the most of their lives after war.

Now, the youngest of the group is 69. The oldest: 71. Their lives had spun out in completely different directions after Vietnam. All got married, fathered children, and built successful careers. But when they finally reunited in Florida, they were, at least for a moment, just four Marines and a longboard.

“Unless you fought in war, and your life depended on these other guys,” said DeVenezia. “There’s a bond there that — it’s real, it’s physical — I can’t explain it. It’s hard to explain.”