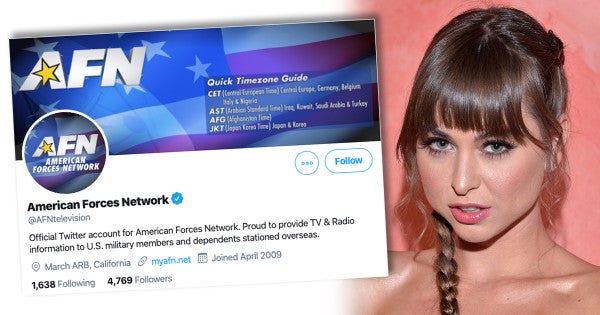 “I spit my Rip-It out on my laptop,” wrote a user on the Army’s reddit community of the incident. “Great job getting that to slip by.”

The American Forces Network, or AFN, provides news and entertainment programming on radio and television to troops stationed overseas. And on Sunday, the station was bringing in a live feed of Super Bowl 54, along with the occasional shoutout from service members who were using the hashtag #SB54AFN.

Enter Twitter user @obeydylanb, who claimed he was in Africa with the 2nd Battalion, 506th Infantry Regiment and wanted a shoutout to his “wife” Riley, tagging the account of Riley Reid, an adult film star with 1.7 million followers.

Reid, 28, has starred in hundreds of pornographic films, though you may want to hold off on Googling her name if you are on a government computer. Her Twitter account, which lists her profession in her bio, is most definitely not safe for work.

The official AFN account retweeted @obeydylanb minutes later as a ” to AFN viewers in Africa and their family members back home in the states.”

“Put it on the game so she can see it lmao,” @obeydylandb wrote back. AFN responded: “It was up earlier – hope you saw it!”

Soldiers with 2-506 Infantry, the White Currahee Rakkasans, are in the process of redeploying back to the states from Cameroon, according to a Facebook page for the unit.

Reid did not respond to a request for comment from Task & Purpose. Task & Purpose was unsuccessful in reaching out to @obeydylanb over Instagram, but he did take a victory lap with his “wife” in a subsequent tweet.