Why did nobody ever tell us that the Army has a ‘railroad conductor’ MOS?

Why don't they lead with that at the recruiting office? 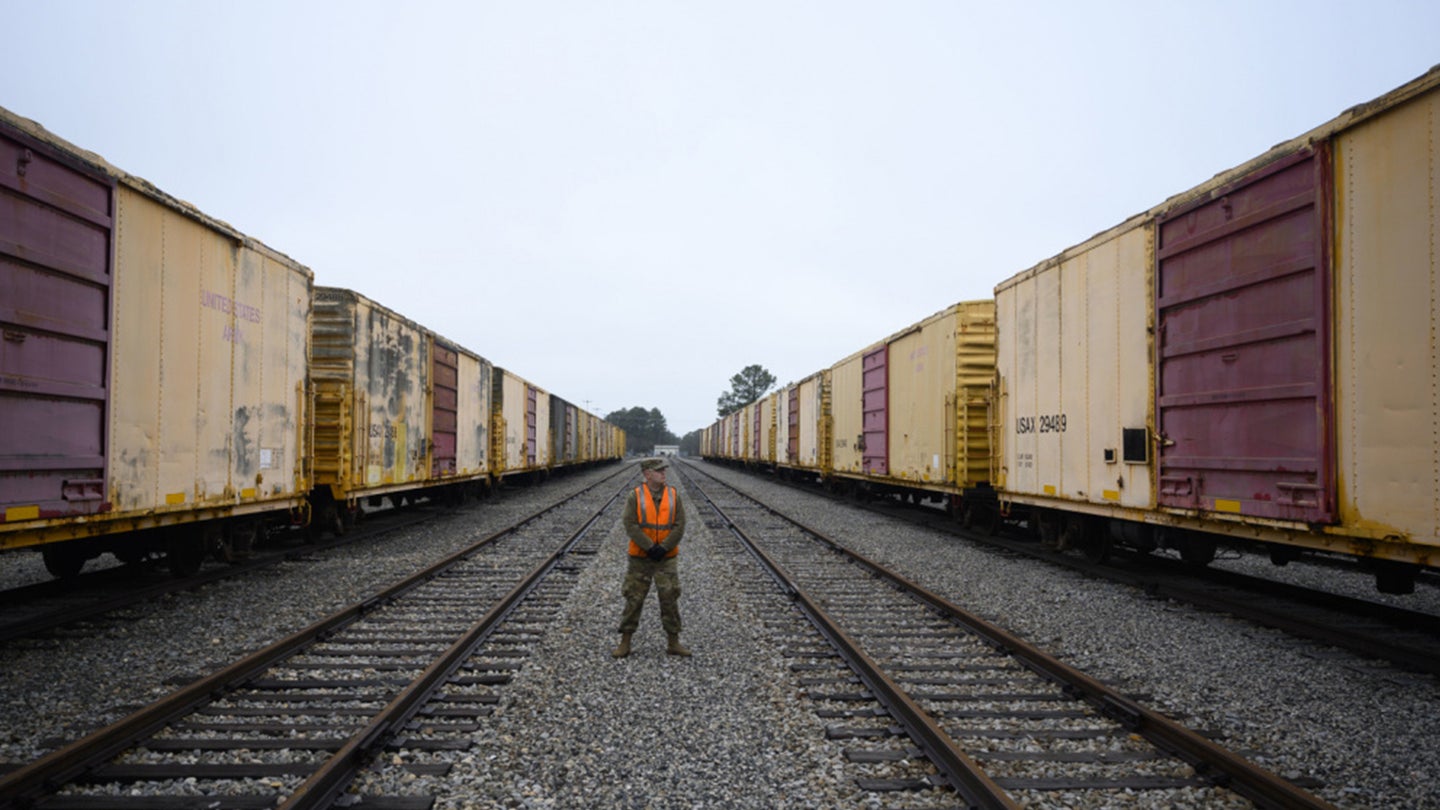 The military keeps a lot of secrets, and sometimes for good reason. But one thing we at Task & Purpose can’t wrap our heads around is why they decided to stay quiet about what is quite possibly the best job in the military, the Army’s 88U military occupational specialty: railroad operations crew member. Why don’t they lead with that at the recruiting office?

Forget the “what’s your warrior” commercials or the “we’re going to save the world” ads, just snap a photo of an 88U soldier on a train with the words “this could be you” in bold underneath and you’ll have lines out the door of every Army recruiting station along the Union Pacific.

Unfortunately, there are only 180 slots available in the MOS, and they’re all in the Army Reserve, according to a press release published by the service on Tuesday. By contrast, there are an estimated 1,000 to 1,500 members of Delta Force, the Army’s elite counter-terrorism unit.

Although the Army’s railroad corps is small, they sure are mighty: the Army’s railways provide a fast, reliable, and incredibly efficient means of transportation for war gear that no other land-based method can match.

“Rail is and always will be the fastest, most efficient way to move supplies from one place to another over land,” said Staff Sgt. Teresa George, an instructor assigned to the 94th Division, 80th Training Command, which is an Army Reserve training center based at Fort Lee, Virginia.

“It takes two soldiers to move a train with a hundred railcars when the same supplies would take hundreds of soldiers” via trucks or planes, she explained. “Once you get a train moving you can move a ton of freight approximately 492 miles on a single gallon of fuel. In addition, unlike transportation via truck or plane, you have a better eye on where your supplies are located.”

The Army’s railway mission goes all the way back to the Civil War, George explained, but it’s still been used to transport troops, supplies, and munitions as recently as Operation Enduring Freedom. Coordinating those logistics takes know-how, and that’s where the 88Us come in. Soldiers in that MOS perform car coupling and uncoupling operations, send and receive hand signals, execute orders from signal towers, switches, and other personnel, and assure the safe hauling of cargo aboard the Army’s diesel-electric locomotives.

According to one Army recruiting video published in September, the learning curve goes like this: 88Us start out by becoming certified brakemen, which means they inspect trains for safety; help with switching, give signals and, as the name suggests, apply the brakes. Soldiers then have the option of getting a higher certification as a locomotive engineer, who actually drives the train. In case you’re wondering, a train engineer operates the locomotive, while a train conductor oversees the entire operation, according to International Business Times. Depending on the train, the rest of the operation may involve other crew members, passengers, or even operating the track switches and inspecting equipment.

88Us have to be experts in their field in order to put together a railroad plan in the U.S. or overseas.

“Today’s Army railway mission is set up in an advisory role,” said George. “Information is collected, then interpreted to assess and advise on the feasibility of the use of rail in the continental U.S. and overseas … to include tasks like inspecting track conditions, and assisting a contacting officer on working with a foreign railroad.”

Sometimes working with a foreign railroad is the most difficult part of the job, according to one specialist interviewed for a video about the MOS in September.

“They have different rules, they operate different rail, so working with that is challenging,” he said.

But we all know what the best part of the job is: driving the friggin’ train.

“To most trainees, the greatest excitement is when you actually become an engineer and operate one of the Army’s powerful locomotives,” said the narrator of the September video.

The video also pitched the MOS’ civilian applications. One of the soldiers interviewed said that he was a railway conductor in his civilian job.

“To be able to bring the two entities together and continue to serve my country, I thought would be an awesome idea,” he said.