27 of your favorite fictional firearms, ranked

An egregiously non-scientific ranking of fictional futuristic firearms based on capabilities, lethality, and real-world practicality. 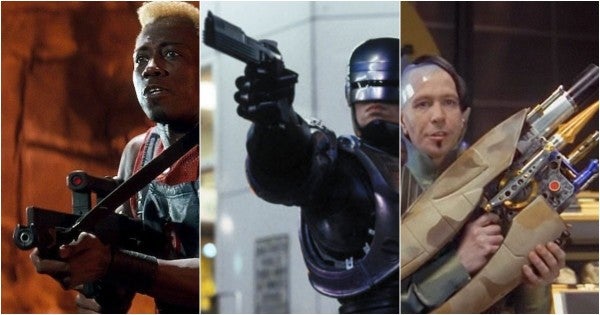 There’s a scene from ‘Demolition Man’ that’s always stuck with me. Upon fleeing his incarceration in futuristic Los Angeles, the batshit crazy Simon Phoenix (played by Wesley Snipes) goes hunting for weapons at a nearby museum, stocking up on machine guns and pistols when inspiration strikes. “Wait a minute, this is the future,” Phoenix smirks. “Where are all the phaser guns?”

Sadly, the world’s militaries have yet to field the futuristic firearms we’ve always dreamed of, but at least movies and television have attempted to make those dreams a reality. Below, an egregiously non-scientific ranking of fictional futuristic firearms based on capabilities, lethality, and real-world practicality.

Nothing says “I’m definitely unarmed” like a pair of finger guns.

In 1997, the creators of South Park imagined one of the foulest non-lethal weapons ever — and yes, it’s as gross as it sounds.

24. The Army’s Next Generation Squad Weapon

The Army isn’t on the hunt for any old rifle for the Next Generation Squad Weapon intended to replace the M4 carbine and the M249 squad automatic weapon. No, the Army wants the “iPhone of lethality” — if the program ever gets around to producing a prototype.

Cons: Impossible to use

Lightweight, reliable, and versatile, the E-11 is the perfect standard-issue rifle for Imperial Stormtroopers, optimal for a variety of combat scenarios despite their relative inability to hit a goddamn thing.

Small enough to fit in the palm of your hand, the Noisy Cricket packs a mean punch. And apparently it fires “a small orb of energy?” Sure, whatever.

Francisco Scaramanga may not be the craftiest criminal mastermind James Bond ever faced off against, but he certainly had some style.

Technically fire arms, given the original Human Torch’s status as an android

18. The Sex Machine Crotch Pistol (From Dusk Till Dawn)

The world’s most Freudian dual-cylinder revolver, brandished by Sex Machine (Tom Savini) when a biker at a roadhouse comes at him with a switchblade.

Cons: The jokes write themselves

The Joker rocks a Smith & Wesson Model 15-3 with a telescoping barrel, according to the Internet Movie Firearms Database.

Reggie Bannister’s quad-barrel shotgun is really just two Rossi Squires on a custom mount. Still gets the job done, though.

Cons: The recoil must be a bitch

The phaser family of weapons, fielded to Starfleet personnel in the Star Trek franchise, encompasses both pistol and rifle configurations. Sure, directed energy beams tend to fall outside the scope of “firearms,” but they’re too ubiquitous and iconic to leave out.

Pros: Lightweight and efficient for a directed energy weapon.

Cons: Does nobody ever sweep their beam in the Star Trek universe or what?

Those are electricManville automatic shotguns with 25-shell cylinders and a fire rate of 900 rounds per minute. Too bad Mouse only gets off a few rounds before he gets perforated.

Cons: Unwieldy as all hell

This Carrington Institute submachine gun offers major backup with a fire rate of 1000 rounds per minute when deployed in sentry mode. Even better, is folds up into a bootable PC when you’re dealing with the TSA.

Cons: Shoulda been a Macbook

Fun fact: The “Magnetic Accelerator” 1X.31A particle weapon pilfered from a museum armory exhibit in 2032 by insane convict Simon Phoenix (Wesley Snipes) in Demolition Man was built on the the H&K G11 that was one of four submissions tested in the late ’80s by U.S. officials as part of the Advanced Combat Rifle (ACR).

11. Hadron Enforcer (Guardians Of The Galaxy)

Rocket Racoon said it was designed to “blow up moons,” the monster gun appears to fire a lil’ baby nuke of sorts despite being named after the world’s largest particle accelerator.

Pro: Can blow up moons

They call it a “Big Fucking Gun” for a reason.

Finally, the fictional voice-activated machine pistol that self-destructs in the wrong wielder’s hands

The standard-issue assault rifle of the Locust War engineered to carry more ammo and fire with less recoil.

Cons: Jams easily. Also, USA Today might put it into a graphic.

It is very, very difficult to make an argument against .75 caliber rocket propelled, armor piercing, explosive rounds — especially when each Bolter is genetically coded so only Space Marines can use them. That’s one way to deal with the illegal arms market, I guess.

While bulkier than the standard M41A pulse rifle, the Smart Gun with its articulated third arm provides enough support to keep users mobile and deadly

This Beretta 93R comes chambered in 9x19mm Parabellum, according to fans, with a variety of specialty ammo options. It also looks damn good spinning around your finger while you contemplate your strange cyborg existence.

Cons: Holsters inside of your thigh

Finally, a slick, ergonomic all-in-one firearm that packs the joys of flamethrowers and rocket launchers into a single weapon.

Cons: That little red button on the bottom of the gun

The Predator’s shoulder-mounted energy turret, technically known as a Plasmacaster, is a long-range energy projector weapon with automatic targeting capabilities. Attached to an articulated third arm, it is capable handling a batch of xenomorphs with no serious issues, which makes it automatically superior to most of the other firearms on this list.

Cons. Only available through rite of passage, apparently.

Pros: The go-to of Han Solo, who to be clear, definitely shot first.

Cons: Based on the gross German C96 “Broomhandle” Mauser pistol

The Morita series of rifles may not be as powerful as the other firearms on this list, but they are certainly the most realistic, sort of! Built around the Ruger AC-556 rifle with a custom Muzzelite MZ14 Bullpup stock and an underslung Ithaca 37 shotgun, this honestly looks like the sort of thing you’d actually grab from your bedside at the first sound of trouble.

Cons: Not real at all.