A possible sky penis has been sighted over Ramstein Air Base in Germany, but U.S. and German military officials could... 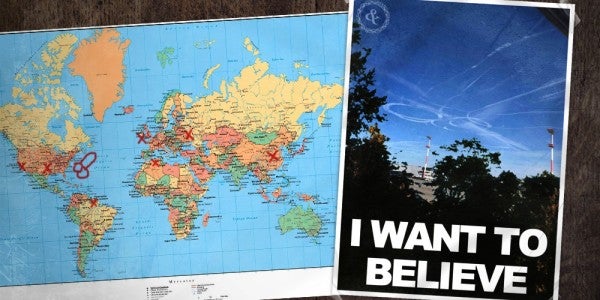 A possible sky penis has been sighted over Ramstein Air Base in Germany, but U.S. and German military officials could not say whether the phallic-looking contrails were meant to intentionally resemble an aerial putz.

Retired Air Force Master Sgt. Steven Mayne first received pictures and video of the supposed sky schlong on Friday morning, he told Task & Purpose. He then posted some of the images of the contrails on the unofficial Air Force amn/nco/snco Facebook group, for which he is the administrator.

The pictures do not provide definitive proof of a penis though. The contrail loops also resemble eyeglasses and other non-phallic items. Mayne said commenters on his Facebook page were divided on whether the pictures showed a penis in the sky or chemtrails.

Other commenters noted the possible sky phallus was eerily similar to a bona fide sky dong that two Navy aviators painted in the sky over Washington state on Nov. 16, 2017, said Mayne, who was in the Air Force from 1992 to 2012.

Both the Navy EA-18G pilot and backseat aviator who used their plane to draw a penis in the sky were disciplined.

Air Force officials in Germany were still working on Task & Purpose’s query after the images were posted Friday afternoon. The 86th Airlift wing, which is based at Ramstein, is not home to any planes that could draw contrails in the shape of a penis, but other NATO allies also fly in the airspace around the base, a wing spokeswoman said. The 52nd Fighter Wing in Spangdahlem, Germany, which has F-16s, is looking into the matter, said a wing spokeswoman, who expected to have more information on Monday.

Meanwhile, T&P; attempted to contact German military officials, but this reporter’s German is so rusty that they are likely struggling to figure out what in the living hell this means:

Did you see this or have an idea what it is? Tell us in an email or the comments, and hopefully soon we’ll know if this is a sky penis or if people are just being Freudian.