The Problem With Military Masturbators

The U.S. has a problem. The civilian-military divide is now so large that many Americans are permanently stuck on one... 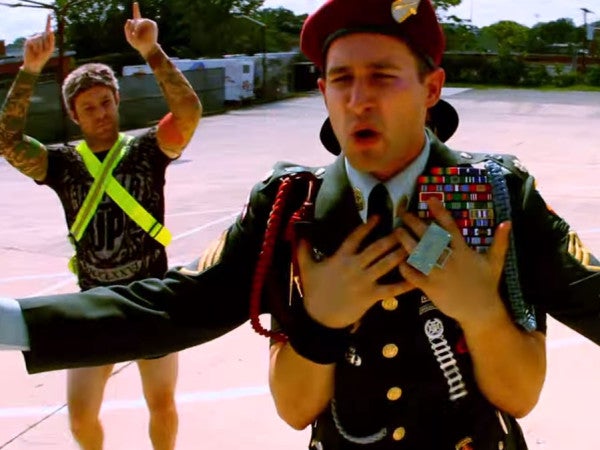 The U.S. has a problem. The civilian-military divide is now so large that many Americans are permanently stuck on one side or the other. Lots of civilians have absolutely no idea what happens in the military, nor do they really care. All they want is the chance to air out a stereotype, be it good or bad, hero or fool.

To many, we are characters in a movie or a video game. Serving your country is about as remote a concept as herding a flock of sheep. Yet these same folks waste hours thinking and talking about us. Everybody has to know what they think, apparently.

What makes this so strange is the frequency and regularity of their comments. Few other topics have this sort of hold on people’s imaginations. It fulfills some weird need for this group. It’s a dirty habit they can’t control, defined by two things: total ignorance of the military, and an urge to passionately share their opinions.

These characters are Military Masturbators (MMs); and they are stimulated, aroused even, by talking about the military. It’s weird because they don’t get this way about the economy, education, or other issues that are much closer to their day-to-day lives.

MMs can’t resist giving other people their thoughts about war, guns, post-traumatic stress (disorder), veterans, and anything else you can think of. Pick your favorite military topic and they'll have something passionate to say about it, either positive or negative. MMs don’t know how to say, “I’m not familiar with that topic.”

It starts with the way they think about military personnel. To MMs, we are trained/manipulated to do awe-inspiring things such as jump on grenades, nail insurgents with iron sights from 500 meters, and medically evacuate an entire squad single-handedly.

All the boring parts of the military are forgotten; the parts that make up 99% of your life: standing duty, cleaning your barracks room like it's being prepped for surgery, and sitting around playing Playstation for hours while waiting for word.

This one-sided view confirms what MMs already believe about who we are, and why we behave the ways we do.

Some consider us dyed-in-the-wool heroes. However you are now, at one time you were an indestructible mix of Chuck Norris and The Rock. And you sounded like the guy who does voiceovers for action movie trailers. You ate MREs every day because they tasted good, and when you took a dump, it was shaped like Uncle Sam.

To others, we are broken souls. The war (it doesn't really matter which one) messed us all up. All that heroic stuff you did is now wrecking your life. You can't order a shake at McDonald's without a flashback. And the real tragedy is that you didn't have to go through all those traumatizing experiences. The recent wars were all avoidable because peace is the natural order of things.

You may be skeptical about the existence of Military Masturbaters, and I don’t blame you. Maybe you’ll agree after trying a little thought experiment. Think back to the most confusing/frustrating conversation you ever had with a civilian. What sort of questions were they asking you? Weren't they trying to lump you into one of two categories?

You're not alone, my brother or sister. MMs are all over the place. The confusing part, though, is why these folks ignore all evidence that contradicts their point of view.

It’s because they don't really care about you or the military, but can’t stop talking about it.

Remember that you're not even a real person to an MM. From their perspective, they can be as condescending or starry-eyed as they like. All that matters is they say “Thank you for your service” at the end of the conversation, and maybe donate a dollar to the Wounded Warrior Project the next time they check out at Safeway.

You can try to break the cycle, though. Unfortunately it requires the worst possible action on your part: Keep talking to them.

MMs will only be forced to confront their own raw stupidity when they get to know people who are undeniable authorities. The trick is that you can’t walk away or get angry. That will only confirm everything they already think. Instead take a deep breath, resist the temptation to put the person in choke hold, and continue the conversation. Try to understand their point of view.

When I say it’s not easy, I mean it. The last time I dealt with an MM, I got so mad that I stormed out of the room, leaving him (and his girlfriend, who happens to be my wife’s best friend) stuck inside my apartment complex.

And I considered that a victory. Baby steps.