"It's a strikingly bizarre military version of a Jackson Pollock.” 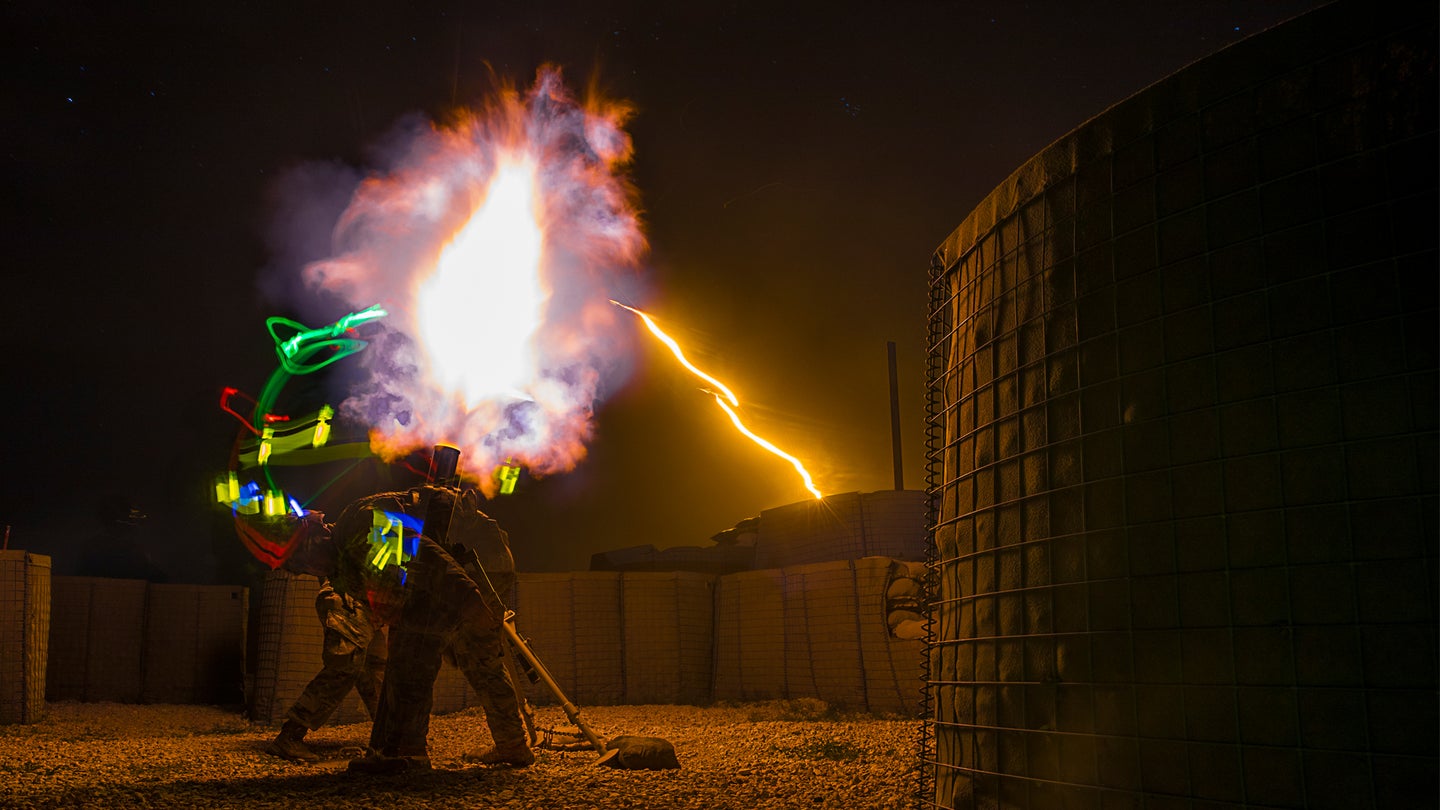 American soldiers firing a 120mm mortar in Syria are the accidental stars of an absolutely epic war photo that looks trippy as hell.

The photo by Army Sgt. Torrance Saunders, which we spotted on page 62 of a watchdog report on Operation Inherent Resolve that was released on Tuesday, shows two soldiers firing illumination rounds from a 120mm mortar “during base defense live fire training” in Syria on March 16, according to the photo caption. The soldiers are with Alpha Company, 1st Battalion, 6th Infantry Regiment, known as “The Gunfighters.”

“It’s a strikingly bizarre military version of a Jackson Pollock” painting, said Matthew Callahan, a Marine veteran who was recognized in 2018 as the military photographer and videographer of the year for his own stunning shots of Marine artillerymen and others taken during an eight-month deployment to the Middle East.

The long-exposure photo of Gunfighters dropping mortars is not technically challenging, but as Callahan explained, the hard part is the preparation. “It takes knowing their job to an extent,” Callahan said, explaining the anticipation and patience needed on the photographer’s part as soldiers drop rounds down the tube of what appears to be an M120A1 120mm mortar, which can deliver steel rain out to roughly four and a half miles.

After examining the picture’s metadata, Callahan concluded that Saunders staked out the spot and placed his camera on a tripod in order to keep it steady while the soldiers dropped rounds. He used no flash. The 30-second exposure time of the picture makes it appear more like a work of art than a snapshot that freezes a subject in time.

“Think of it as a painting,” Callahan said. “Over the course of 30 seconds, layers of paint have been applied to this canvas … the light streaks, the explosions. All of those things are happening at different points of time.”

This is why all those crazy colors and light patterns that make this photo so interesting can be explained. The streaks in the sky are previous illumination rounds launched from the mortar tube, which light up the ground below while falling to Earth and moving with the wind to the right of the frame. The hints of yellow and blue appear to be chem light sticks attached to one soldier’s uniform and the brush of red appears to be coming from a small red light attached to a helmet.

There’s even a ghost outline of the mortar barrel, showing that the photographer captured the slight movement of the barrel after the 120mm illumination round hit the firing pin and launched from the tube. However you explain it, the thing looks really cool and Saunders captured it all.

“The whole thing is super beautifully composed,” said Callahan, who marveled at the sharp, well-lit HESCO barrier and other aspects of the photo that catch the eye. “For as chaotic of a picture this is, it’s super balanced.”

According to Army Sgt. Brandon Caulfield, soldiers with 1-6 Infantry have been deployed to Syria since September 2020 in support of the Operation Inherent Resolve mission to defeat the Islamic State group, or ISIS. The group remains “territorially defeated” but continues to pose a threat in Iraq and Syria, according to the watchdog report, which estimates there are some 10,000 ISIS fighters left seeking refuge in the Syrian desert.

The soldiers in the picture are trained mortarmen attached to Task Force Warclub who were doing base defense battle drills that day, said Col. Wayne Marotto, a spokesman for OIR. The Gunfighters were “outstanding in daily security patrols in a complex environment” in northeastern Syria, he added.

ISIS is down but not out, according to the report. The brutal terrorist group displayed “tenacity” in pulling off a deadly attack in Baghdad earlier this year that killed and wounded more than 140 people, said Marine Gen. Kenneth McKenzie, the commander of U.S. Central Command. Meanwhile, U.S. troops in the region have also faced threats from Iran-backed militias, which have carried out an “increasing number of attacks” against coalition troops and diplomatic facilities this quarter. An Iranian militia killed one civilian contractor and wounded nine others during a Feb. 15 attack on Erbil Air Base.

“These militias focused their attacks on military facilities in Iraq, while continuing to conduct harassment-style attacks on the U.S. Embassy and other diplomatic facilities,” the report said, adding that militia threats had at one point even led American contractors to temporarily evacuate Balad Air Base where Iraqi F-16 fighters are based.

Caulfield said the Gunfighters of Alpha Company, in particular, have been supporting the Syrian Democratic Forces and conducted dozens of dismounted operations in the country’s north, as well as several night operations with illumination rounds like those pictured. Their deployment appears to be winding down as soldiers from 1-6 Infantry have been returning home to Fort Bliss, Texas in recent months.

As for how and why this work of art wound up inexplicably tucked away inside of a federal report, your guess is as good as mine. And that’s just groovy, baby.

Next: Putting warheads on foreheads — This is the gear Air Force combat controllers carry into battle

This article was updated after publication with comments from an Army spokesman.