17 essential pieces of gear for your war on Christmas

With Thanksgiving finally over, the sleepy sleeping masses are bracing themselves for the ultimate struggle for the soul of America:... 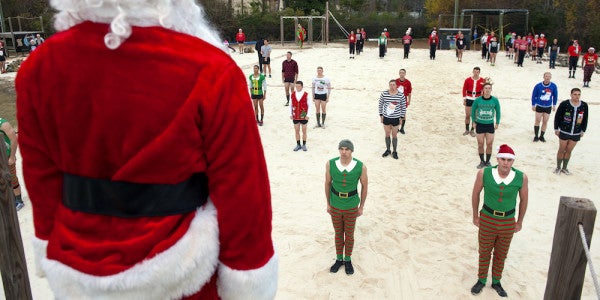 With Thanksgiving finally over, the sleepy sleeping masses are bracing themselves for the ultimate struggle for the soul of America: the annual War on Christmas.

Efforts to ban Christmas have real historical roots in the Massachusetts colony with Puritans banning the celebration in 1659; but in the centuries since, philosophical questions of church and state have evolved into an embarrassing national tradition triggered by the freakout over the non-existent decline of Christianity in our constitutionally secular democracy. During World War I, British and German soldiers spontaneously ended hostilities on Christmas Day 1914, leaving their trenches to join together in No Man's Land to bury the dead, exchange gifts, and engage in a now-legendary game of soccer. Today, Real Patriots™ take a stand against the century-old effort by international Jewry to sterilize Christmas by throwing a shit-fit over veteran-friendly Starbucks' seasonal coffee cups. We're sure this is exactly what my homeboy Jesus would have wanted.

But if you must prepare yourself for an annual exercise in asymmetric culture war that even the Pope has deemed “a charade,” we recommend you do so by engaging in a real all-American tradition: a crazed journey through the funhouse of late capitalism born from the Protestant Puritan work ethic that this country was built on. With this in mind, Task & Purpose is here with 17 essential pieces of gear (and fantastic gifts) that will make even Sebastian Gorka look like a hobo:

A Mossberg shotgun in a tube

The Mossberg 500 12-gauge pump-action, the most effective combat shotgun on the planet, is perfect for those break-glass-in-case-of-secularism moments — especially since the tube itself also includes matches, duct tape, fishing hook and line, razor blade, signal mirror, fire-starter cube, and more, sealed up in a water and impact-resistant survival kit. Never be caught unawares against the forces of your own paranoia again. [Oh hell yeah, tell me more]

A “Die Hard” sweatshirt for fun and intimidation

Adorned with a glorious one-liner from the only good Christmas movie after Lethal Weapon, this piece of apparel sends three distinct messages: 1) warmth! 2) laughs! 3) don't fucking fuck with me, you fuck!

Believe it or not, it's not completely illegal to own a machine gun in the United States, depending on the weapon and your own personal legal status. We recommend packaging this sweatshirt with some instructions on how to legally pick up some full-auto action in your state. [Yippie Ki-yay, motherfucker!]

Let's be real: Nobody looks this happy when they're taking a dump.Photo via Squatty Potty

As any veteran of Afghanistan or Iraq will tell you, an active war zone is no excuse for not shitting the right way. Luckily, Squatty Potty's handy footstool is perfect for helping you boot your own stool from the poorly designed comfort of your porcelain throne. [Holy shit!]

Facing down atheists and AntiFa is thirsty work, so why not lug around a gallon of beer in your own personal ManCan keg? Nothing says “I love Jesus Christ” like blowing a .389 while yelling at neighborhood kids to get off your lawn. [Cheers!]

Just in case you're not a beer man, the Macallan X Urwerk Whiskey Flask offers an extra level of protection for that sweet, essential booze with several layers of titanium, aluminum, and stainless steel. [Bottoms up!]

The perfect discreet pipe the pothead in your platoon or the long-suffering vet hamstrung by garbage VA restrictions. [Fire it up!]

What time is it? Looks like Freedom O'clockPhoto via Timex Amazon

Yes, everyone and their mother has a Timex, as former 1st Special Forces Group NCO Blake Miles told us in February. They're great for bartering and building trust with local forces, “a magical rapport builder” when meeting new officials in Iraq or Afghanistan.

Good advice, but let's be real: When liberating those godless strongholds on the East Coast, eggnog or sugar cookies might prove a less expensive taste of freedom. [Daddy likey!]

A DxO ONE mini camera

Sure, it looks like an expensive doohickey that's no substitute for your built-in phone camera, but it's the perfect camera attachment for the would-be videographer in your life — or just that one guy who has to film his angry rants about the War on Christmas in his car's driver's seat because his wife keeps yelling at him for making such a racket. [Make me a star!]

Take it from me, a Jew: We bite — and if we don't like what we taste, we'll just complain and send it back. [Want!]

The Skyroam SolisPhoto via Skyroam

The Skyroam Solis doesn't work everywhere — you can't stream The Punisher from Nangarhar, for example — but it's perfect for the culture warrior whose campaign against godlessness takes them around the world. After all, posting shitty memes and tweeting at Hillary Clinton isn't just an American pastime. [The shitposter has logged on!]

Nothing says “I love Christmas” than flexing up on your neighbors with Chaos' face all over your torso. [FUCK YES!!!]

United Cutlery's M48 Cyclone Fixed Blade isn't just an exotic piece of intimidating weaponry — it's the perfect everyday-carry blade for when your next engagement against the forces of evil requires defecation before evisceration. [You call that a knife?]

The only thing redder and more #Murica than a God Emperor Trump cover is a Santa hat. After all, what screams “late capitalism” more than an army of elven slaves churning out disposable consumer goods for the landed bourgeoisie? Just kidding: Gifts are welfare and welfare is socialism. [I like hats!]

Sebastian Gorka carries one, according to his recent profile in Recoil Magazine: “I never go anywhere without my copy of the Constitution, the owner's manual to the greatest nation on God's earth.”

It's a great field guide for the War on Christmas — just make sure to highlight that pesky Establishment Clause! [Shut up, nerd!]

To tear up, not to use, you fucking commie pinko. ['Murica]