This VR tour takes you into the trenches of WWI, but stops short of leaving you ‘fully traumatized’

"We got it as close as we could without people leaving this thing fully traumatized.” 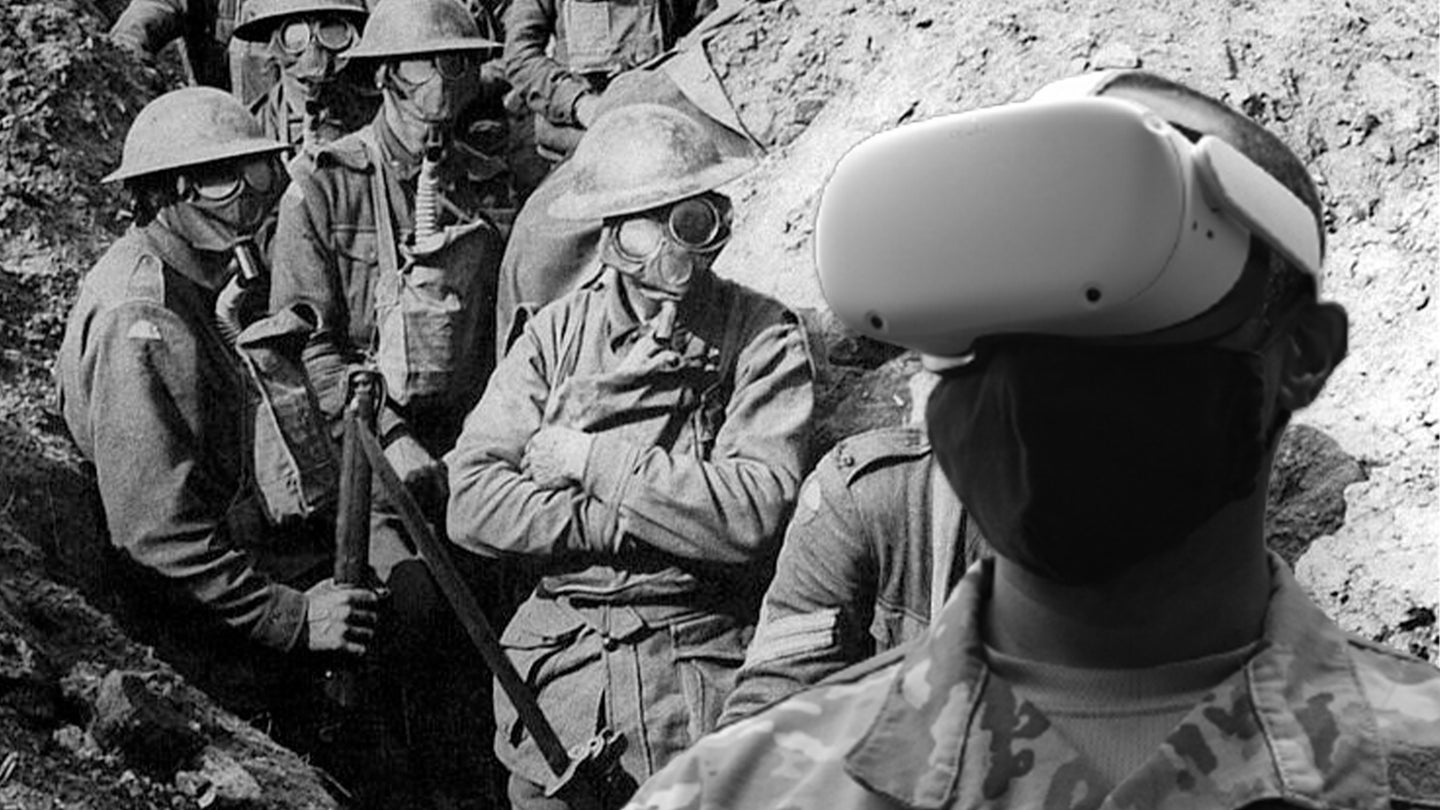 Time machines don’t exist, but this exhibit might be the next-best thing. War Remains, an immersive virtual reality experience at The National World War I Museum and Memorial, takes visitors back to the bloody trenches of World War I during the 1917 Battle of Passchendaele, where about 450,000 Allied and German soldiers were killed, wounded or went missing outside the Belgian city of Ypres.

After putting on the VR goggles, visitors walk through a network of trenches lit by distant fires, explosions and an occasional flare overhead. The scene is apocalyptic: the earth around you is cratered by artillery fire, there are limbs hanging into the trench, and the fiery night sky gives the whole experience a horror-movie atmosphere. That feeling of horror is exactly the note exhibit producers wanted to hit.

“What VR can do is fool your lizard brain,” said podcast producer Dan Carlin, who helped create War Remains and who narrates the experience. “It can make the hair on the back of your neck stand up even though your conscious brain knows that this isn’t real. The combination of all those things together seemed like a likely place to recreate a nightmare.”

Carlin is a great choice to narrate: his podcast Hardcore History, which has a series of episodes on WWI, is one of the easiest ways to learn about the complicated conflict. But he’s only one member of a team of experts who helped create War Remains. Others include Skywalker Sound, the famous sound effect studio that did the effects for Star Wars and Indiana Jones, and the overall director, Brandon Oldenburg, whose animated short film The Fantastic Flying Books of Mr. Morris Lessmore won an Academy Award in 2012.

“We designed this experience to use technology to provide an added layer of what we’d like to call empathy amplification, a chance to get a little deeper into the story than the previous tools available to most of us [such as books, movies, podcasts, etc.] have allowed for,” Carlin said in a statement for reporters during a media preview of the exhibit on Monday.

Unlike a movie or a video game, War Remains offers more than just sights and sounds. At the museum in Kansas City, Missouri visitors walk through a physical recreation of the World War I trench system seen through their VR headsets. They can reach out and touch the artifacts they see inside the VR goggles, such as a radio in a bunker or the rosary clutched by a dead hand hanging into the trench. There is also a rubber coating under the floorboards to simulate the feeling of mud beneath them, and there are sub-bass transducers in the wall to make visitors feel the vibrations of exploding artillery shells in their body.

“Shell shock was a real thing, and, as we all know, concussions are a real thing,” Oldenburg told reporters on Monday. “Those sorts of things had lasting, dramatically tragic effects on those who survived the war. That vibration simulates what it was like being adjacent to an explosion that was happening all around you.”

Taking visitors back to the trenches like never before is the main draw for War Remains, but there was a fine line between showing the brutality of the Western Front on the one hand, and traumatizing visitors on the other.

“It is taken to the extremities and limits of gore, but that is doing honor to those who experienced it,” Oldenburg said. “Had there been a WWI veteran that we could have put through this, I would have been embarrassed, because I know we still didn’t reach the levels of extremities of how horrific it was. But we got it as close as we could without people leaving this thing fully traumatized.”

Oldenburg reminded reporters that, unlike for the people who lived through the trenches, visitors always have the option to take off their goggles and go home. For that purpose, the exhibit includes warnings outside the exhibit for those with post-traumatic stress disorder and certain medical conditions. Some visitors reach their limit a lot sooner than others.

“There have been times with press and others where we’ve observed people go through and the moment they see a rat they’re like ‘I’m done, I’m leaving,’” Oldenburg said.

Whatever your appetite for realism may be, War Remains seems like a once-in-a-lifetime opportunity to revisit a century-old war that still shapes our world today. Details to visit the exhibit in person can be found on the museum website. The exhibit opens on May 27. For those who can’t visit in person, there is also a home edition of War Remains that viewers can use with a VR headset. The home edition doesn’t come with the real-life trench set which makes the museum experience that much more real, but reviewers on the online retailer Steam still enjoyed it.

“My grandfather had a phrase: ‘never judge a man until you’ve walked a mile in his moccasins,’” Carlin said in a video promoting War Remains. “This is farther than you’ve ever been able to get before.”

Related: 7 visceral WWI movies and shows to watch after you experience ‘1917’