I Learned The Value Of An Education In Afghanistan

The Afghan man looked at the paper with a blank look on his face. “Does he know what that says?”... 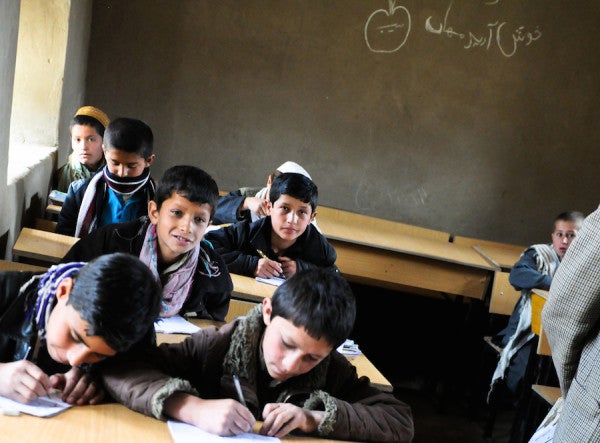 The Afghan man looked at the paper with a blank look on his face.

“Does he know what that says?” I asked my interpreter.

“No, he cannot read,” he said. “Very few people here can read or even write.”

“You explained it and he understands it though, right?” I said.

“Yes, he said he trusts us,” the interpreter responded.

During my deployment to Afghanistan, the company I was attached to was looking to implement a small project. There were several local contractors in the area and they were all jockeying to do this job and get paid. I thought it would be a good idea to have a contract with the contractor, so I composed a simple one that said how much he would be paid, when he would be paid, and when we expected the work to be done. It could have said anything in the world other than what the project was about, because as I found out, he couldn’t read.

Related: Everything I really need to know I learned from Afghan security forces »

In America, I would never sign something if I didn’t know what it said. I’m as guilty as the next person for not pouring over every last word on a contract or the terms of use in an app that I download, but I’ll at least skim it over and if anything sticks out I’ll ask a question and clarify it.

In Afghanistan, a lot of people don’t have that ability. According to the CIA World Factbook, only 28% of the adult population is literate. Last spring, the BBC reported that in 2001 only 21% of children in the country were enrolled in school; this did not include girls, who were not allowed to attend school. Since then, much progress has been made for sure, but it doesn’t mean the problem of thousands, if not millions of children, without a formal education has gone away. Decades of fighting and unrest in Afghanistan have resulted in systemic governance problems for the country, but the untold number of people without a basic education will cause headaches for years if not decades to come in that country.

I went to a good school from first grade all the way through high school that my parents paid good money for me to go to. I graduated toward the bottom of the class and not because my classmates were smarter than me — although looking back, there were some very bright people in my class — or because I had a learning disability. I simply had a poor attitude about school. I thought it was wildly unnecessary learning about stuff I didn’t see the importance in. I thought school was the ultimate “check in the box.” I was a punk for having this attitude and I regret it.

Over 10 years later, I am in college working on my bachelor’s degree. It’s good that I came to college later than my peers. I wasn’t ready after high school and I certainly didn’t have the right attitude. I wouldn’t change the experiences I’ve had either, but if I had gone straight into college out of high school — and hadn’t flunked out somehow — my life would have been much different I’m sure.

It was in Afghanistan that I saw what an education can do for people. Being able to read and write — the most basic of education principles — is something I vastly took for granted. With my simple — by Western standards — education, I am head and shoulders above people trying to get ahead in countries like Afghanistan. There are a whole list of reasons why I am better off than a person living in Afghanistan, but having an education is one of the main advantages that I have.