The Air Force Academy’s a cappella group is advancing to the semifinals of NBC’s America’s Got Talent after bombarding viewers... 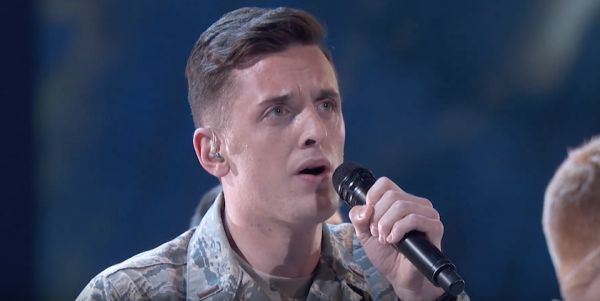 The Air Force Academy’s a cappella group is advancing to the semifinals of NBC’s America’s Got Talent after bombarding viewers with a lethal combination of heart-melting harmonies and dance moves during the show’s quarterfinals on Aug. 16.

The all-male group, called In The Stairwell, performed a cover of Fun’s “Some Nights” Tuesday evening at the Dolby Theater in Los Angeles. Of the eleven acts who competed, only seven were selected to advance to the semis. Losers included a Donald Trump impersonator and a singing clown named Puddles Pity Party.

In The Stairwell entered the quarterfinals buoyed by the praise they’d received from celebrity judges during the previous round. “We are ready to fly,” vocalist Benjamin Hightower said in an Air Force Academy news release prior to Tuesday’s performance. “We are going to do our best and hope America supports us.”

Freshman cadets at the Air Force Academy in Colorado Springs, Colorado formed In The Stairwell in 2004. The group got its name because of a policy that prohibited singing in the school’s dormitories, leaving the young vocalists only one place to polish their pipes: the stairwell.

In The Stairwell is now an official Air Force Academy club.

a cappella
air force academy
america&apos;s got talent
in the stairwell
some nights