In March, we were treated to the delightful vision of Brad Pitt as a four-star general tasked with rebuilding Afghanistan... 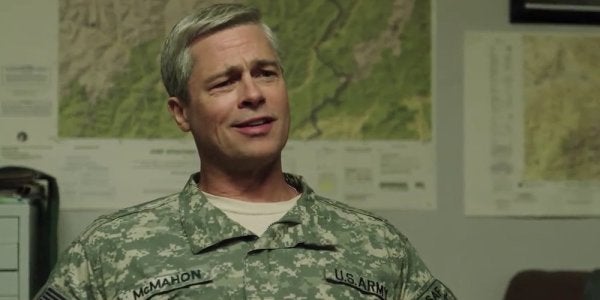 In March, we were treated to the delightful vision of Brad Pitt as a four-star general tasked with rebuilding Afghanistan in “War Machine, the “politically charged military satire” adapted from the late Michael Hastings' book “The Operators: The Wild and Terrifying Inside Story of America’s War in Afghanistan” that ended the career of said general. But while it was pretty clear from the brief 45-second teaser who, exactly, Pitt's channeling with his jovial smile and aw-shucks attitude, we didn't get a good taste of his portrayal.

But Friday, the new trailer for “War Machine” gave us our best look yet at Gen. Stanley McChrystal Glenn McMahon in action — and boy howdy, is he a character:

“We are here to build,” says Pitt to his assembled troops in the opening of the new trailer. “To protect! To support the civilian population. To that end, we must avoid killing it at all costs. We can't help them and kill them at the same time, it just ain't humanly possible …”

“War Machine” is billed as “part reality, part savage parody,” an “anti-establishment, pro-soldier exploration in the form of an absurdist war story of a born leader’s ultra-confident march right into the dark heart of folly.” But how does it stand up to reality? Well, let's check the original source from Hastings' original Rolling Stone article:

Where Gen. Petraeus is kind of a dweeb, a teacher's pet with a Ranger's tab, McChrystal is a snake-eating rebel, a “Jedi” commander, as Newsweek called him. He didn't care when his teenage son came home with blue hair and a mohawk. He speaks his mind with a candor rare for a high-ranking official. He asks for opinions, and seems genuinely interested in the response. He gets briefings on his iPod and listens to books on tape. He carries a custom-made set of nunchucks in his convoy engraved with his name and four stars, and his itinerary often bears a fresh quote from Bruce Lee. (“There are no limits. There are only plateaus, and you must not stay there, you must go beyond them.”) He went out on dozens of nighttime raids during his time in Iraq, unprecedented for a top commander, and turned up on missions unannounced, with almost no entourage. “The fucking lads love Stan McChrystal,” says a British officer who serves in Kabul. “You'd be out in Somewhere, Iraq, and someone would take a knee beside you, and a corporal would be like 'Who the fuck is that?' And it's fucking Stan McChrystal.”

Hastings published his story in July 2010; President Obama fired Gen. McChrystal for the commander's critical comments to the magazine about his administration's approach to the War in Afghanistan. The whole saga, though, seems fascinatingly absurd given nearly 7 years of hindsight. Either way,”War Machine” looks damn entertaining … and with a premiere on Netflix, you don't even have to shell out cash for overpriced popcorn to laugh your ass off.