After a minute of explosions, alien spacecraft, and a crash-landing in a Blockbuster — so you know it takes place … Continued 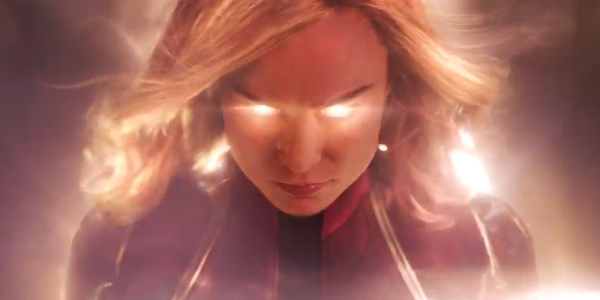 After a minute of explosions, alien spacecraft, and a crash-landing in a Blockbuster — so you know it takes place in the ‘90s — the new trailer for the upcoming Marvel film shows us the real origins of Air Force Col. Carol Danvers. Danvers grows from downtrodden adolescent to determined Air Force cadet, to outstanding fighter pilot, to cosmically-powered warfighter in the span of a few frames.

“I’m not what you think I am,” quips Brie Larson’s as the titular Captain Marvel, before bursting with roiling energy; your next badass superheroine is here to stay.

If this seems familiar, it should. The trailer evokes old Department of Defense recruiting commercials, like a young woman’s transformation from student to Marine in last year’s recruiting spot, “Battle Up.” It’s a common hook in military recruiting ads: You tell a life story, or a coming-of-age tale, in 60 seconds flat. After all, joining the military to transform into the pinnacle of martial perfection, and thus become a national superhero in your own right, isn’t a new lure. Anyone remember that one commercial involving a mameluke-sword-wielding Marine in dress blues vanquishing a demon?

The similarity is likely accidental, as is the trailer’s release on the Air Force’s 71st birthday. But those similarities underscore an intriguing facet of the upcoming Marvel movie: With Carol Danvers poised to take over the mantle of tentpole hero from contractually-liberated Robert Downey Jr. and Chris Evans, the new trailer is a potentially powerful recruiting tool for a service eyeing an ambitious expansion amid an ongoing pilot shortage.

Captain Marvel arrives at an inflection point in the Marvel Cinematic Universe, with Col. Danvers expected to (eventually) pick up where Avengers: Infinity War left off with an unmitigated beatdown on purple space Hitler, Thanos. But Danvers’ introduction to the MCU also comes amid some veritable torch-passing, with longtime heroes Captain America and Iron Man (contractually) set to hang up their shields and privately-owned weapons of mass destruction and walk off into the sunset. Sure, fellow Air Force pilot James “War Machine” Rhodes and pararescue airman Sam “The Falcon” Wilson could step into those roles (as they have in the comics), but it’s more likely that the next decade of movies will see Danvers as the beating heart of the MCU.

“The Air Force partners on any number of entertainment projects to ensure the depiction of Airmen and the Air Force mission is accurate and authentic,” Todd Fleming, chief of the Community and Public Outreach Division at Secretary of the Air Force Public Affairs, told Task & Purpose via email. “Our partnership with ‘Capt Marvel’ helped ensure the character's time in the Air Force and backstory was presented accurately. It also highlighted the importance of the Air Force to our national defense.”

This means that, instead of an Army O-3 and a drunken defense contractor, Marvel’s figurehead will be a female Air Force pilot — the perfect symbol for a force focused on recruiting and retaining pilots. And while Fleming emphasized that the Air Force’s collaboration with Marvel was not part of an explicit recruitment strategy, she did praise the film’s portrayal of Danvers’ time in the service.

“[Captain Marvel] is not part of a recruiting strategy but we would expect that audiences seeing a strong Air Force heroine, whose story is in line with the story of many of our Airmen, would be positively received,” Fleming said.

The spotlight on airmen comes at a time when the Air Force, like the other services, is hunting for the next generation of pilots. The Air Force, Navy, and Marine Corps are all short 25% of their pilot billets, according to a GAO report published this summer; the Air Force in particular has doled out cash incentives like candy in a vain effort to prevent pilots from defecting to the private sector. Indeed, the branch’s plan to increase its number of squadrons by 76 to Cold War levels will require an additional 40,000 personnel, further straining the service’s recruitment capabilities. At the Air Force Academy, female cadets are increasingly encouraged to vie for pilot spots to help bridge that gap.

The @usairforce says it needs 386 squadrons so it had these mugs made. But this poster was also spotted at #ASC18 pic.twitter.com/r84XcaBv3H

“It is in the interest of the Air Force for the public to understand the importance of the Air Force to our national defense.” Flemming said. “[And] the main character's story also highlights the incredible work that our Airmen do every day.”

Indeed, the Air Force is working hand-in-hand with Marvel as it has since the production of Iron Man in 2008 to help ensure that Larson’s Danvers reflects the life of an Air Force pilot through and through, including access to “Airmen, installations, and capabilities to ensure the depiction is as accurate as possible,” Fleming told Task & Purpose.

“When the Air Force and OSD reviews a script and elects to support a project, we have determined that the movie portrays the Air Force and military in an accurate way and that is in the service's interest to partner on the project,” he added.

And it’s clear Larson is taking her new role as America’s foremost airman seriously. In March, Marvel Studios announced the official start of production on Captain Marvel with a photo of Larson, and Air Force Brig. Gen. Jeannie M. Leavitt, then-commander of the 57th Wing and the service’s first female fighter pilot, atop an F-15 at Nellis Air Force Base in Nevada

“I was very impressed with how seriously Brie took the role and how much she wanted to ensure it was accurate,” Leavitt said of Larson’s visit, which included a flight in an F-16 and a tour of the Gulf War-era F-15. “She spent a lot of time with our pilots, understanding what it meant to be a fighter pilot and how we do certain things. And so I was very impressed by that dedication she showed and how seriously she took the role.”

“She really got to experience what it's like to fly in a high-performance fighter jet,” Leavitt told T&P.; “She could give the specifics of how much she enjoyed it, but I think she had a great time.”