Critics Rave About This New Show For Its Authenticity, But It Still Stereotypes Vets

Looking for a new sitcom to binge on while on overnight duty? You might be tempted by the Netflix reboot... 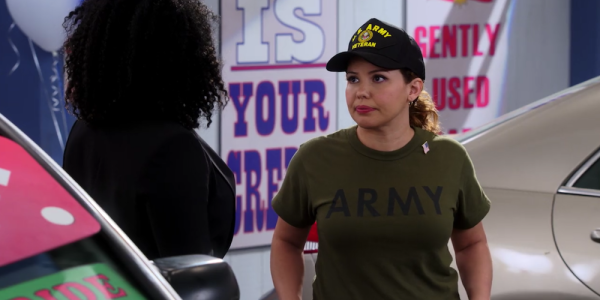 Looking for a new sitcom to binge on while on overnight duty? You might be tempted by the Netflix reboot of “One Day at a Time.” The new version of the series is about a family of military veterans and the critics love it. Fusion said it “achieved the authenticity we’ve been missing from television.” CNN insisted it “gives reboots a good name.” The New York Times declared it “better than the original.”

I disagree. There are some laughs, but those become stifled under the show’s obviously liberal, politically charged slant. The show’s plot follows Penelope, a Hispanic Afghan War veteran and recently separated single mom as she battles parenthood, her Cuban mother, and the VA. Penelope’s biggest beef by far is with her soon-to-be ex-husband Victor, a former Army infantryman, now working as a contractor in Afghanistan.

Unfortunately, Penelope’s veteran backstory comes off like ill-applied camouflage paint, designed to conceal Hollywood-style political ideology beneath a veneer of virtue. Over the course of the first season, the audience learns that Penelope previously served in Afghanistan as an Army nurse, having sustained a shoulder injury during a mortar attack. So far, so good, but the writers get the details wrong. For example, there’s a scene where Penelope gives her daughter’s friend her old “leather” Army combat boots. Never mind that jungle boots were phased out in 2008. Later, Penelope is shopping for a car and is surprised to learn that her car salesman is a woman and also an Army vet. The two talk about how they had enlisted, but as an Army nurse, wouldn’t that make Penelope an officer? Such sloppy errors show up throughout the first season, and though the details are minor, it makes the rest of the veteran backstory feel like the writers are playing vet bingo, marking off common misconceptions about former service members and applying them to their lead character.

My biggest criticism of the show, however, is in the writer’s treatment of Penelope’s ex-husband, Victor. It’s presumed that they served together as sergeants in the Army. Suffering from a traumatic brain injury, he began drinking heavily upon his return from Afghanistan, prompting Penelope’s decision to separate. He re-enters her life toward the end of the season, apparently a changed man but estranged from his wife and out of touch with his daughter. That’s when the writers blow it. Spoiler alert: Victor eventually relapses revealing that his change is not sincere. That’s right: Victor, a veteran suffering from post-traumatic stress disorder, is the bad guy. In the end, he abandons his daughter right before the father-daughter dance at her quinceañera, a few hours after she tells him she’s a lesbian.

Related: The Portrayal Of Veterans In ‘Orange Is The New Black’ Is Appalling »

In its strenuous effort to portray members of the armed forces in a positive light, “One Day at a Time” makes Penelope a strong female veteran who is seeking help for her service-related injuries. Then, to make her even more sympathetic, they trash her male veteran counterpart. Victor is the opposite of Penelope: He’s the stereotypical bad vet. He doesn’t move on from Afghanistan. He refuses treatment for his PTSD. He struggles with alcoholism. He’s, heaven forbid, a conservative.

The worst part is, it didn’t have to be this way. The writers set up a perfect opportunity to redeem Victor at the season’s finale by having him show up at his daughter’s quinceañera, despite his misgivings about her sexuality. By allowing the character to make that final, conciliatory gesture, the writers could have displayed depth and empathy for his character. But they thought it worked better like this. Where veterans are concerned, it seems, Hollywood is still in no rush to portray the veteran demographic authentically, or with real empathy.

To be fair, the show does have a strength, and that’s in its portrayal of the Hispanic-American family, one that crosses several generations. The airing out of cultural and intergenerational differences is what the show is really about and where many of the laughs come from. But it’s not enough. This show does nothing to improve the negative image of the male combat veteran, but instead has thrown more stereotypes and misconceptions into the mix.

The show’s producer, Norman Lear, gave us some of the most classic shows ever made, including “All in the Family,” which perfectly captured the fraught politics of the 1970s. And Lear is a veteran himself, having enlisted after Pearl Harbor and served as a radio operator/gunner on 52 combat missions. And he’s a supporter of veterans telling their own stories on film.

That said, Lear’s 94, and he’s probably not the main force behind the show. Let’s hope he gets more involved in season two.

afghan war
netflix
One Day at a Time
veteran stereotypes