Director Peter Berg: ‘We Don’t Fully Understand The Secret Costs Of These 2 Wars’

Most people thank veterans on Veterans Day because they think it’s the right thing to do. And don’t get me … Continued 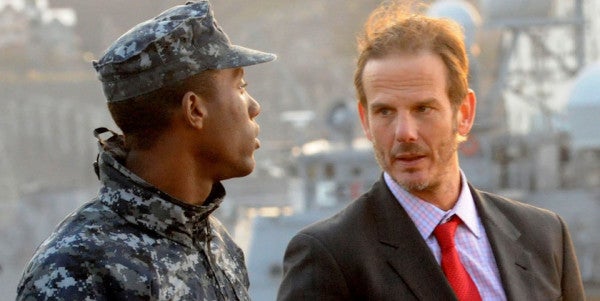 Most people thank veterans on Veterans Day because they think it’s the right thing to do. And don’t get me wrong: It is the right thing to do. The simple act of picking up the phone and calling a veteran to thank them for their service goes a long way. As a veteran, I’ve been on the receiving end of that phone call a few times, and each time it surprised me almost to tears. People had, in fact, been paying attention.

But, as conflict journalist David Wood argues in a recent Task & Purpose article, there’s another, perhaps more impactful way to let a know a veteran know you appreciate the sacrifices they made on behalf of our country: Don’t just thank them. Ask them to tell their stories.

That’s the thinking behind HISTORY Channel’s “The Warfighters,” a new docu-series that will premiere four episodes back to back 0n Nov. 11. Each episode focuses on a different special operations mission or series of missions from the wars in Iraq and Afghanistan. The stories’ subjects run the gamut, from Navy SEALs, to Army Rangers, to Force Recon Marines, but they’re all bound by themes that many service members and veteran can relate to: brotherhood, loss, fear, the chaos of combat. They’re also just really good stories.

Related: Finally, We’re Getting a TV Series With Real SOF Stories From Iraq And Afghanistan»

The show’s executive producer is Peter Berg, best known as the writer and director of the 2013 war film, “Lone Survivor,” about a failed Navy SEAL mission in eastern Afghanistan that cost the lives of all the operators involved except one, Marcus Luttrell. Through the process of making that film, Berg established a network of friends and contacts within the special operations community that continued to grow. Then one day it dawned on him: If you got a bunch of these guys together they could make one hell of a TV series. And so “The Warfighters” project was born.

To better serve his goal of making a documentary series that would stand up under scrutiny, Berg opted to take a backseat role in the show’s production, allowing special operations veterans to take the lead instead.

Over 90 veterans were involved in the making of “The Warfighters.” They did everything from choreograph and act in the battle reenactments, to conduct the interviews with the actual men who fought in those battles. The result is a documentary series that offers an honest, gritty, and deeply emotional portrayal of life at the very tip of the spear.

“I think anyone who has served in any capacity will recognize the level of detail and the accuracy of these stories,” Berg told Task & Purpose. “Even just on a purely tactical level, they’ll like in the show. It’s like a bunch of very seasoned NFL players talking about football.”

On the eve of “The Warfighters” premiere, Task & Purpose spoke with Berg about his enduring relationship with the special operations community, the challenges of telling an accurate war story, and the unique contributions veterans make to Hollywood.

How did you guys find these stories? What was the criteria?

The criteria was really to put together a group of producers/veterans who all worked in the special ops community, and we told them to go find stories. And we backed their play, and if you put 10 special ops guys in a room — whether it’s SEALs or DELTA guys or Recon guys or the PJs from the Air Force — there’s no shortage of great stories. So we let them come to us with their picks for the first eight or so stories. Some of that is based on access to the soldiers who were involved in the operations and their willingness to tell the stories. So once they identified the stories they wanted, we made sure we could get the access to the guys and then we just went with our guys.

What do you hope the civilian audience takes away from this series?

Just a deeper understanding and a greater access point to what it is our soldiers are going through today. We think we understand it because we’re able to communicate so much differently than we have in the past, but we really don’t. We don’t fully understand the secret costs of these two wars, and I think it’s critical that if we’re to understand how to help veterans how to transition out that we better understand what we asked them to go through while they were in.

Was at least part of the intent here to put a human face on the special operator community?

Yeah, absolutely. The public hears the phrase “special ops” and they have these images from “Call of Duty” of what a special ops soldier is. It’s this misconception that these guys are these bionic superheroes. In reality, these are human beings. They’re vulnerable and emotional and complex as anyone. They make tremendous sacrifices for us, and it’s worth us getting to know them better so we can have a better appreciation for what it is we’re asking them to do, and what the cost of that ask is. So the next time a president says, “Okay, we’re going in,” hopefully people will have a better understanding of what they’re asking these men and women to do, and we’re also considering the issues veterans face when they get out — the high suicide rates, the drug and alcohol abuse, the marriage problems. We want to attention brought to all aspects of these guys’ lives.

What is it about these guys’ stories that you really wanted to draw out or highlight in this series?

It, for me, always goes to emotion. One of the things I was privileged to able to learn when I was able to spend time with the Navy SEAL community when I was writing “Lone Survivor,” I got to know these men on a pretty deep level emotionally. And the deeper I went with these men, who were obviously very confident and competent, the more emotional I found them to be. The love they had for each other, the brotherhood, the belief in the idea of patriotism — these are very emotional concepts. When “The Warfighters” works best, and I think you see it in every episode, it’s just these guys talking very simply and openly about how much love they have for each other. That, for me, is the biggest takeaway.

Because you’re a civilian, when you’re working with these guys, do you feel like there are some lines you can’t cross?

Absolutely. That’s one of the reasons I wasn’t asking the questions. Because oftentimes we were going to get guys to talk about very, very emotional and intense experiences, where they were critically injured, where their brothers were killed. And I felt that those questions and the ability to sort of read someone’s willingness to talk about those issues is better determined who lived through it. I think one of the reasons that these guys opened up and talked the way they did was because the questions were being asked by veterans they were willing to go deeper than they would had it been civilians asking the questions.

Do you think more veterans should be working in Hollywood?

I know a lot of veterans who have come to Hollywood for different reasons. My time around special ops guys in particular, we’ve often just talked about how creative these guys are, how funny they are, what good imaginations they have. In many ways, there’s a very artistic quality to their lifestyle. And it doesn’t surprise me that so many guys come out here. It’s not just, “I want to be an actor,” or, “I’m a good-looking ex-Navy SEAL I want to be in front of the camera.” There’s a lot of guys who come out here and they want to figure out how to tell their stories — and not just their military stories. So many of these guys had extraordinary lives before they even got into the special ops community, and that’s what lead them into the special ops community. These are pretty extraordinary guys and oftentimes they’re hungry to tell their stories, and they end up in Los Angeles trying to figure out how to make movies and TV shows.