Active-duty military members and veterans can see the upcoming film First Man for free as long as they are among... 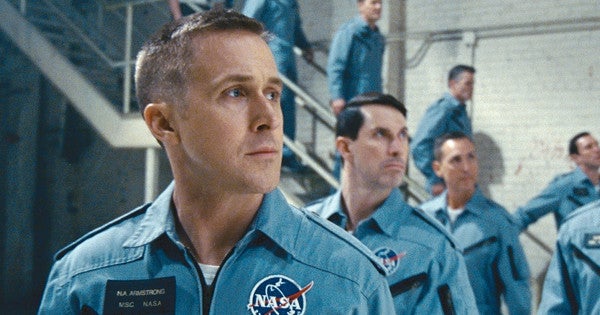 Active-duty military members and veterans can see the upcoming film First Man for free as long as they are among the first 25 in line on Thursday.

More than 14,000 free tickets are going to be given out at theaters nationwide on Oct. 11, according to a press release from Universal Pictures and Regal Theaters. The film, starring Ryan Gosling as astronaut (and Naval aviator) Neil Armstrong, explores the years 1961 to 1969 that culminated in the first manned mission to the moon.

Both Armstrong and his fellow astronaut Buzz Aldrin set foot on the moon on July 20, 1969 — perhaps one of the most badass feats a human could achieve (with second place going to Aldrin for punching a guy in the face after he was called a liar).

Judging by the trailer, the film certainly looks pretty good, and it has great ratings on movie review site Rotten Tomatoes.

Of course, there are some caveats to address in order to get in and see the show: You need to make sure you go to a Regal Theater (you can find participating theaters here) for the 7:00 p.m. show on Thursday with a valid active-duty or VA ID card. Unfortunately, the promotion only earns you one ticket per ID, so you'll have to pay for an extra if you're bringing company.

“During his career as a Naval aviator, our dad flew 78 combat missions in the Korean War,” Mark and Rick Armstrong said in the release.

“The friendships he forged during those critical years remained deeply important to him all of his days. Freedom — much like landing on the moon — is an achievement that is hard fought and hard won, and it cannot be accomplished without the sacrifice of our men and women in uniform and their loved ones. We’d like to join Universal and Regal in thanking all our current and past veterans, as well as their families, for their brave service to this great nation.”