Why Hollywood Screws Up Its Portrayals Of The Military

With Clint Eastwood’s “American Sniper” going into nationwide release Jan. 16, many Iraq vets will be heading to theaters to... 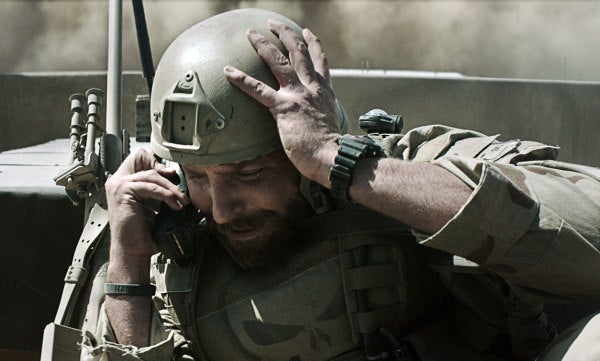 With Clint Eastwood’s “American Sniper” going into nationwide release Jan. 16, many Iraq vets will be heading to theaters to get a look at the first feature film to give the war an extended “boots-on-the-ground” treatment. The Hollywood blockbuster's adaptation of the late Chris Kyle’s autobiography has received mostly positive reviews, but veterans will be judging Eastwood’s version of the story by an entirely different standard.

When it comes to military films — particularly those set in the midst of a war in which they served — veterans want filmmakers to get it right. But the errors and inaccuracies that we hate so much are not, as many seem to assume, so easily avoided. Certainly, some productions do better than others, but after having been involved in shooting a wide range of military films on and off over the past 15 years, I have concluded that military movie “goofs” are impossible to escape.

The following list is not intended as a litany of excuses. Rather, it is a distillation of what I have learned after several years of beating my head against a wall in an honest effort to get it right. This won’t satisfy the kind of purists who want to argue such things as the sheer implausibility of military plot points in 2014’s “Godzilla,” but it might help allay that inevitable “crawling in your seat” discomfort you may feel the next time you’re at the multiplex.

Before I go any further, I should note that if you’ve already locked and loaded a comment about how there is a law that actually requires movies to make mistakes, you can stow it. The team over at Ranger Up has already taken that myth to the yard so I don’t have to.

Every film has a production manager whose job is budgeting all aspects of a movie’s production schedule. From advisor man hours to weapons rental to training days for actors, everything goes into that budget, and it all affects accuracy. Some pictures simply don’t have the money to hire a professional advisor, so they wing it, expecting the department heads to do their own research and hoping the on-set crew will ensure things look right. This approach obviously seldom passes muster, but even where films have the money to hire one or several technical advisors (on “American Sniper,” there were four), production managers will limit the time they are on hand just to save money, no matter how big the budget. On “Batman v. Superman: Dawn of Justice” — a film with a massive production budget in the $250 million range — the technical advisors were not involved in all aspects of military portrayal, instead coming and going throughout the course of production based on the director’s needs and the production manager’s fiscal constraints. Even though the means to keep military advisors on hand were there, the producers chose to entrust the wardrobe department with military uniforms and only called in the advisors when training was required for extras and stuntmen.

2. There are hundreds of people contributing to a film, and they all have opinions.

Having a technical advisor — or even a whole staff of them — still doesn’t mean everything in the picture is there as a result of his or her input. The production crew for a studio film is deeper than a four-star’s staff and characterized by the same diversity of ego. Just sit through the after credits of the next studio picture you see to get an idea of how many people are contributing to the final version of a big film. Nothing requires any of those individuals to take the military advisor’s advice, and they all have a vision for what they think should end up on the screen when the theater lights go down. On “American Sniper,” for example, the costume designer found one of the film’s villains to be more ominous if she dressed him entirely in black — to include a black keffiyeh and a knee-length black leather jacket (in Al Anbar, in the summer.) The military advisors thought it absurd, but could not convince her that the practical authenticity of his wardrobe should overtake the creative thought she had brought to developing the character’s look. It was one of a handful of times where creative considerations simply trumped reality.

3. Sometimes, the script is just fundamentally flawed and embarrassingly derivative.

If there’s one thing screenwriters are good at, it’s recycling everything from played-out war movie tropes to bad dialogue. When I first pick up a screenplay for a military movie, I can be reasonably confident that at least half the dialogue will need to be revised to sound remotely authentic. Problem is, the technical advisor can’t just go in and make changes to the script. His notes instead have to be negotiated between the director and a handful of producers, and just as it was with the costume designer, the champions of accuracy don’t always win. So you, the audience, get stuck with dreck like, “Aim the pointy end at the monsters. Right, Sarge?” all too often.

4. Actors don’t always do what they are told.

Former SEAL Brandon Webb is one of the few veterans to weigh in publically on the film’s relative accuracy, writing that among his problems with “American Sniper” is the Marines sometimes exhibiting poor muzzle awareness. Now I’ll forego any argument as to whether that actually happens in combat, and accept Webb’s compliment that “the USMC has some of the most disciplined riflemen” he knows. But as you might have suspected, those were not in fact Marines in the film. The extras portraying the grunts of 3rd Battalion, 1st Marines were actually a group of about 100 Moroccans and European expatriates, none of whom had any legitimate military experience. Few spoke English, and fewer had ever held a rifle before they came to us for four days of training. As for the actors portraying Marines, with few notable exceptions, none had any military experience. They arrived on set the day they filmed and we had 30 minutes to teach them how to hold a rifle. So, yes, they flagged each other during building entries in the film’s version of Fallujah II, but given where we started, the other Marine advisors and I are proud of what we got out of them.

Webb also noted in his critique the Ranger tabs (and Ranger battalion scrolls and nametapes for that matter) worn by the Ranger snipers in combat. He’s right that it would likely never happen, but sometimes it is necessary to fudge things for the sake of the audience. As Webb himself noted, in the context of the film it can be “hard to follow branch of service, unit, and command structure.” So we made the call to leave their patches on to help the non-veteran audience understand who these guys were. Interestingly, one inaccuracy in the film that neither Webb nor any other commenter has addressed in public is Bradley Cooper’s facial hair. Chris Kyle did not in fact have a beard when he was in Iraq, but the producers felt that the public closely associated Kyle with the one he grew after leaving active duty, so it would be best if Cooper kept it for a majority of the film. Once again, the advisors’ recommendation was overruled, but the decision set up another issue regarding wardrobe. When continuity considerations did not allow Cooper to shave for the scene portraying the funeral of his friend Marc Lee, the producers did agree with the advisors that if Cooper was to keep the beard, he would not be in his dress uniform for the scene.

6. The post-production process is disjointed.

Radio traffic always tops the list when veterans complain about a movie, and it can indeed be awful. As I noted above, where military dialogue is scripted it’s often flawed. But what is invariably worse are the lines that are recorded when the film is in post-production. Additional dialogue recording fills in the chatter and background discussions that aren’t part of the on-set filming process, where only principle characters speak. This bit of movie magic usually occurs months after production wraps, and is handled by a session supervisor who has not otherwise been involved in filming. Actors in these sessions often ad-lib multiple lines, and if the technical advisor is not available (or not paid to be there), they can produce wildly inaccurate dialogue that ends up in the finished scene. These recording sessions are also where both scripted and unscripted radio traffic gets recorded, and the reason why the callouts often sound derivative, canned, and outright corny to the veteran’s ear.

7. Advisors serve the needs of the film, not the other way around.

One of Webb’s biggest issues with “American Sniper” is the series of scenes attempting to portray the SEAL sniper course. In his words, the scenes “don’t come remotely close to giving the audience any idea of what SEAL sniper training is like.” And he’s absolutely right. The three-month course was not accurately written in the screenplay, which included only two short scenes intercut with the courtship of Kyle and his future wife. So when the assistant director broke down the script, that portion of the picture was scheduled to be shot on one day at a limited location in the Los Angeles area. It was never considered important to accurately portray the SEAL sniper course, which some might find disappointing. But the purpose of the sequence was to show two sides of Kyle and establish him as a gifted shooter, not to depict the intensity of a sniper student’s six-day workweek. And even though the advisors —one of whom was a Navy SEAL sniper— knew it was doing a disservice to the course Webb managed, the producers did not see it as important enough to justify increasing the cost of the film. The story was simply more important.

No matter how many advisors are working on a picture, they’ll always miss something. It’s not because they aren’t trying hard to get it right. Other factors are always in play, and sometimes it’s just a mistake. As one intrepid veteran pointed out, the Rangers in “American Sniper” were wearing Airborne tabs. They shouldn’t have been, but we missed it. It was an honest mistake on day 65 of shooting. But what’s even more common than the odd unforced error is a fact that most vets will recognize as a fundamental truth of joint operations: No two service members will always agree on everything. And on those occasions where two advisors’ recommendations are at odds, the director makes a call on which to go with.

One notable disagreement on the set of “American Sniper” had to do with the way a deceased service member’s remains are moved. While one advisor knew that the flag-covered transfer cases travel feet first, another advisor was adamant they went the other way. No one would notice this, of course, but for the fact that it determined which way the flag was positioned on each transfer case for a scene where Kyle is escorting Marc Lee’s body back to the United States. In the finished film it’s wrong. But I would never hold that against the advisor who made the call. After all, he did get several hundred things right. Though I doubt anyone will ever catalog those on a comment thread.