An award-winning filmmaker is developing what he describes as an “anti-war” response to American Sniper, Clint Eastwood’s 2014 blockbuster film... 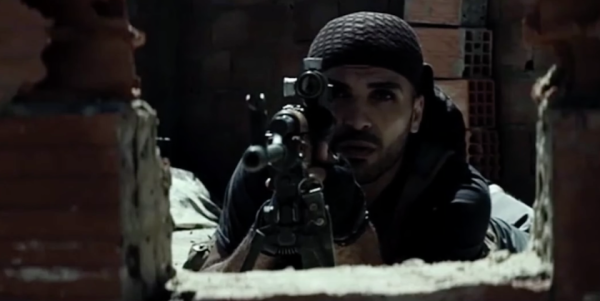 An award-winning filmmaker is developing what he describes as an “anti-war” response to American Sniper, Clint Eastwood’s 2014 blockbuster film about real-life Navy SEAL sniper Chris Kyle’s legendary exploits, according to The Hollywood Reporter.

The project is being developed by Amr Salama, an Egyptian director whose films have garnered widespread international acclaim (and condemnation from Egypt’s government) for their controversial depictions of Egyptian life. His latest film, Sheikh Jackson, centers on an Islamic cleric obsessed with Michael Jackson.

Salama’s upcoming project is a direct rebuke of American Sniper. The film’s working title is Iraqi Sniper, and fans of Eastwood’s film will likely recognize the actor attached as the lead: Sammy Sheik, who played Mustafa, an elusive insurgent sniper and chief adversary to Kyle, played by Bradley Cooper.

“He’s the hero in my film,” Salama told The Hollywood Reporter. “I hated [American Sniper]. That was my inspiration. I hated it so much that I wanted to work on a different version of that story.” Adding, “I’m trying to make an anti-war film. Whereas American Sniper was pro-war.”

The Mustafa character was based on a mythical sniper who fought with the Sunni insurgent group Islamic Army in Iraq. Known only as “Juba,” he was rumored to have killed hundreds of people, including American soldiers, at the height of the Iraq War. Juba was only active for two years and his existence has never been officially verified.

Several videos allegedly showing Juba in action only fueled the legend. One video included footage of at least a dozen attacks on U.S. troops, all of them attributed to the elusive sniper. In that video, “Juba” claims to have killed 143 American soldiers. In another, he threatens to kill President George W. Bush.

The Juba myth, which experts suggest was nothing more than insurgent propaganda, was extremely effective. A 2005 Guardian article, “Elusive sniper saps US morale in Baghdad,” features interviews with deployed U.S. service members who paint a picture of a prolific sniper “who waits for soldiers to dismount, or stand up in a Humvee turret, and aims for gaps in their body armor, the lower spine, ribs or above the chest.”

Iraqi Sniper is still in the script stage of development. Acclaimed Egyptian producer Mohamed Hefzy, who is also working on the project, told The Hollywood Reporter that he is confident the film will have “international appeal.”

“This story merits to be told even if American Sniper hadn’t come out,” Hefzy said. “He’s a very interesting character, a complex character. Amr did a lot of research and we’re trying to get his evolution right.”