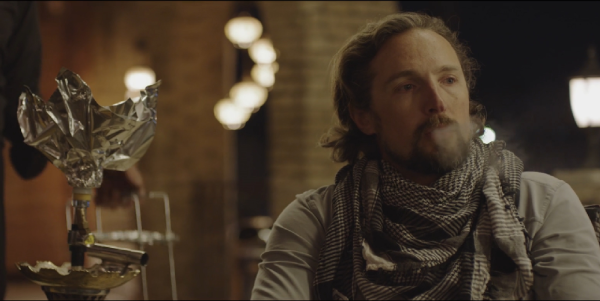 Adventure Not War, a documentary directed by Max Lowe that recently screened at Tribeca Film Festival, follows three Iraq war veterans as they return to Iraq to climb Mount Holgard. The trio battle through the brutal weather, landmines from the Iran-Iraq war, and their personal demons that have driven them to return to the war-scarred country.

What drew me into this story was the first 30 seconds of the film. Stacy Bare’s satirical, rapid fire, energy filled monologue about what war was like was the perfect answer to the question from director Max Lowe, “What was war like?” The film then transitions into a montage of Iraq invasion footage, set to President George W. Bush’s speech announcing the invasion of Iraq which then jumps to U.S. Army veteran Stacy Bare walking out of his house in suburban Utah to pull his recycling bin to the curb. As Stacy goes through motions of comfortable American life, the divergence from the chaos and frantic energy associated with military movements and activities could not be more pronounced.

The circumstances that lead to Stacy’s embrace of the outdoors as a method for treatment of PTSD for veterans stems from his own experiences with addiction. Stacy bears his soul to the world. As he talks about how he was headed towards suicide, a friend of his reached out to him and asked him to “put off killing myself for a week or two and come climb with him,” to which Stacy responded:

“You know what, I can wait a couple of weeks before reenlisting or killing myself, so I’ll go climb with him and see how it goes.”

This climb changed Stacy’s life, putting him on a mission to further outdoors excursions as a method of treatment.

After this pivotal moment in his life, Stacy goes on to assemble a crew to return to Iraq, which includes Robin Brown, a former U.S. Army Captain whose OH-58D Kiowa helicopter crash landed after taking fire during the battle of Fallujah, and Matthew Griffin, also a U.S. Army Captain who was deployed to Mosul with the 75th Ranger Regiment.

The trio journey from the U.S. to Erbil in Iraq, and prep for the trek ahead of them. They encounter locals, make friends, and look into their own souls to examine their past and present. Stacy talks about seeing a dead body being eaten by dogs, Robin brings up her darkest day in Iraq, and Matthew discusses the fear innate in our actions, both as a country and as individuals.

But at the end of the journey, as the film climaxes with the trio at the top of Mount Halgurd, all of the past is forgotten and only the majesty of nature exists as they ski down the mountain. I think that Matthew eloquently sums up the group’s sentiment prior to the ascent when he says: “We’re going to drive up these epic Iraqi mountains.”