Are American Service Members Brainwashed To See The Enemy As Subhuman?

In October, Netflix dropped the third season of the critically acclaimed sci-fi series “Black Mirror.” If you haven’t seen it,... 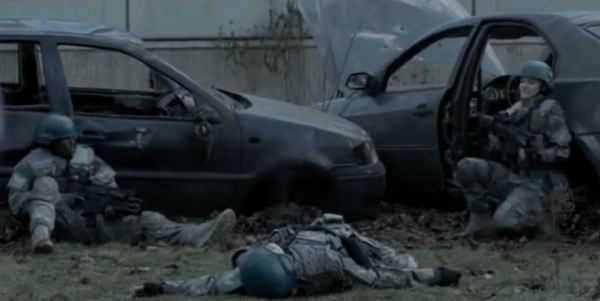 In October, Netflix dropped the third season of the critically acclaimed sci-fi series “Black Mirror.” If you haven’t seen it, here’s a quick summary: There are no recurring characters and no overarching storyline. Each episode focuses on a new problem we may face in the future if our obsession with technology continues (as it certainly will). The new season’s first episode, for example, envisions a world where a person’s worth is completely determined by an internet rating system similar to Yelp or IMDB. For fans of dystopian science fiction, the series is basically heroin.

On the day the third season was released, I sat down to get my fix, all at once. Near the end of my binge, I reached the episode called “Men Against Fire,” about a group of soldiers fighting a post-apocalyptic counterinsurgency. It’s set far in the future, but to me, a Marine Corps veteran of Afghanistan, it felt eerily relevant to today. In fact, despite their futuristic body armor and rifles, it was hard not to see glimpses of my former self and the Marines I had served with in some of the characters. And it was a bit horrifying.

“Men Against Fire” revolves around a fresh young soldier nicknamed Stripe. It’s set in a dystopian future where biological warfare affected a portion of the population. According to the higher-ups, the affected have a blood disease that turned them into monsters. Grotesque faces, sharp teeth, always hungry for blood, they look and behave like something you’d want to kill instinctively, hence why the soldiers refer to them as “roaches.” The military’s main job is to eradicate the “roaches” in order to rid the population of this destructive blood disease. As it turns out (spoiler alert), the soldiers only see the roaches as monstrous creatures because something called a MASS implant – basically a mind control device that’s embedded in the soldier’s brain – makes them perceive their enemies this way.

“It’s a lot easier to pull the trigger when you’re looking at the boogieman. You don’t hear the shrieks. You don’t smell the blood and the shit,” explains one of the episode’s characters, Arquette, a military psychologist played by Michael Kelly.

Certainly, American service members these days aren’t forced to see insurgents in Iraq and Afghanistan as vile, subhuman beasts, but there are aspects of military training and modern American culture that serve to make it easier to kill them. In combat training, during some drills, I recall our instructors playing a Muslim prayer over the loudspeakers to better simulate where we would likely be fighting. It made some of my peers visibly angry. While they may not have intended to sow hate in our minds, the instructors surely planted a psychological association between combat and those prayers.

Soldiers move to their next objective during a morning raid in the Tameem district of Ramadi, Iraq, Sept. 3, 2006.Air Force photo by Tech. Sgt. Jeremy T. Lock

“When guys like me rotate back to the states, we pick up a set of boots who have never seen what we have,” said Tom, a former Marine infantryman. Tom now works as a strategic level intelligence analyst and asked Task & Purpose not to use his last name. “They have just what they know from TV, movies, media, and word of mouth. When you combine their perspective with fireside talk with non-commissioned officers, it can serve as a confirmation of sorts, where these guys become judge, jury, and executioner on their upcoming deployments.”

Watching the episode, I couldn’t help but to think of the word “haji” whenever they said “roach.” Throughout my enlistment, I heard “haji” thousands of times. It’s an umbrella term for basically any person — Iraqi, Afghan, or otherwise — who is native to the post-9/11 battlespace. Of course, in reality, these are people: Family members and friends, farmers, doctors, and civil servants. I realized these differences. Yet I still thought of them as just hajis sometimes. The culture of the Marine Corps, and the warrior culture at large, dictates that our enemies are less valuable than us. In a “it’s me or him” world, this makes sense. We want to get home to our families. What this warrior culture inevitably tends to downplay is the fact that, well, so do they.

“Part of it is from seeing atrocities of your enemies first hand like I have, which makes it easier for me to kill or plan to kill enemies,” said Tom. “They would strap bombs on children and send them into our patrols and blow us up. That happened in Iraq and Afghanistan.”

Would a Marine who’s seen children used as weapons tell his junior Marines that the enemy fights honorably? Probably not. And thus the “roach effect” is perpetuated.

This, of course, is nothing new. The Viet Cong and the North Vietnamese Army troops weren’t Vietnamese soldiers or guerrillas; they were gooks who loved to torture American GIs. German soldiers in the First World War weren’t German soldiers; they were “Huns.” The haji is just the modern gook or Hun — a moniker employed to dehumanize the enemy. A haji is easier to kill than a father or a son. For American service members, this dehumanization of the enemy has only become more intense over the decades and it has become easier to kill enemies. A lot easier.

Staff Sgt Allan Triplett of Louisville, Miss., faces a little competition during an arm wrestling competition while bonding with local Iraqis outside a local eatery in the Ula Market in the Sadr City district of Baghdad on Sep. 24, 2008.Air Force photo by Tech. Sgt. Cohen A. Young

That reality is at the heart of the episode. At a revealing point in “Men Against Fire,” Arquette explains in detail why they use the MASS implants. Referring to S.L.A. Marshall’s 1947 book, after which the episode was named, he tells Stripe that only 15-20% of WWII troops fired their weapons in combat. The percentage for Vietnam troops jumped to 85.

“Lot of bullets flying, but the kills were still low,” Arquette says. “Most of the guys who did get a kill, well, most of them came back home messed up in the head. And that’s pretty much how things stayed until MASS came along.”

In our modern reality, training has certainly played a major role in increasingly the likelihood of American soldiers shooting to kill. But cultural differences also have an effect on how likely we are to pull the trigger. The “us vs. them” mindset is bolstered by how different cultures are. European countries have ways of life much more similar to America’s than the countries where the Global War on Terror has been waged.

We’re fighting wars in countries where farming and herding are among the most common professions. While these place are home to many brilliant minds and strong people, it’s easy to look at them and think of their ways of life as archaic and backwards. And when news and videos of people getting beheaded, or stoned to death, or massacred by an endless succession of suicide bombs, emerge from these places, it only strengthen this notion that we’re fighting backwards “monsters.” American service members probably feel more alienated from the enemy they’ve faced in the Global War on Terror than in any conflict before. There will never be a Christmas truce with ISIS.

Realizing that the MASS implant is the biggest threat to their existence, the roaches adapt. On Stripe’s first mission, a roach uses a device to disable Stripe’s MASS implant, forcing him to see roaches as the people they actually are. In the heat of combat, Stripe had brutally stabbed a monster to death and felt nothing. Now, when the event replays in his mind, he sees that he was, in fact, stabbing a human being. The realization is profoundly devastating.

KABUL, Afghanistan–Members of the Camp Eggars Force Protection team assess the damage of an explosion near the gate on Jan 17. A vehicle born improvised explosive devide (VBIED) exploded near the German Embassy and a US base. The VBIED killed and wounded multi-national personnel and damaged vehicles and nearby buildings.ISAF Photo by US Air Force Tech Sergeant Brenda Nipper

Of course, in reality, a device isn’t required to wake us up to the humanity of our foes. Counterinsurgency operations force us to integrate with the local populace and while this creates opportunity for our enemies to commit brutal acts, it also opens up our eyes to the goodness of most of these people. It’s those who’ve never been downrange who are most susceptible to the “roach effect,” as they have little but the news and media to support their knowledge. In my experience, it’s the Marines and other troops who have seen the most combat whose eyes have opened up to the fact that we’re not fighting faceless monsters, but living, breathing people.

Tom, with whom I served briefly, is one of those enlightened Marines. After serving almost a dozen combat deployments, including a stint as a machine gunner in the Second Battle of Fallujah, he sees not hajis, but people. He once encountered a civilian man harassing a Muslim woman and her child at a coffee shop in Virginia. The man told the woman that “her people love killing our people.” Tom intervened.

“He called me a bleeding heart, and I bought her coffee,” Tom said. “If I can do that, you can let her pass without giving her shit. She could have been Persian-Iranian with no dog in the fight and here she was being associated with Islamic terrorists. The only Americans who really know what the fuck is up is people who have been there.”