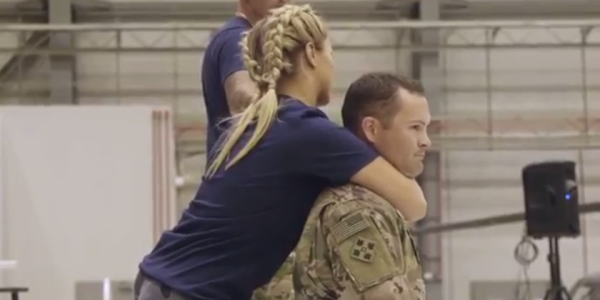 UFC superstar Paige VanZant appears to have choked out a US soldier on Wednesday — but it was all in good fun.

VanZant, 24, was showing a crowd of soldiers at a USO event how to perform a rear naked chokehold before the soldier passed out and went limp, a new video from TMZ shows.

When VanZant let go, the soldier collapsed and was caught and dragged backwards by Max Holloway, another UFC fighter, as the crowd erupted in cheers.

Although dazed, the soldier then stood up and smiled. Hopefully he didn't lose too many brain cells.

It's unclear where the video was shot, but VanZant and Holloway were visiting bases in Spain, Afghanistan, Iraq, and South Korea this week as part of a USO tour.

Watch the video from another angle below: