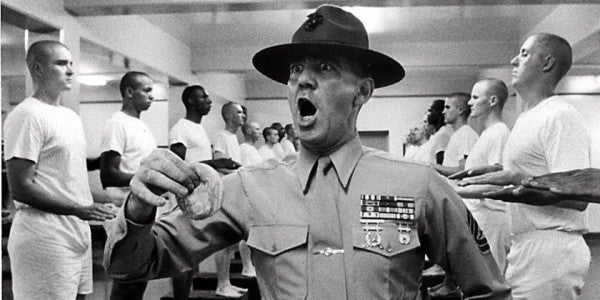 Ermey's longtime agent, Bill Rogin, announced on Twitter on Sunday evening that the actor has passed due to “complications of pneumonia.”

“Gunnery Sergeant Hartman of Full Metal Jacket fame was a hard and principled man,” Rogin told Task & Purpose in a statement. “The real R. Lee Ermey was a family man, and a kind and gentle soul. He was generous to everyone around him. And, he especially cared deeply for others in need.”

It is with deep sadness that I regret to inform you all that R. Lee Ermey ("The Gunny") passed away this morning from complications of pneumonia. He will be greatly missed by all of us.

Ermey enlisted in the Corps in 1961 at the age of 17, providing support for Marine aviators before transitioning into a drill instructor role at Marine Corps Recruit Depot San Diego, where he'd done his own recruit training.

After being medically discharged as an E-6 after in 1972 after a tour in Vietnam, Ermey reportedly struggled with his transition to civilian life. In 1997, he told Entertainment Weekly he “bought a run-down bar and whorehouse” in Okinawa, Japan, but eventually moved on to the Philippines, where he landed his first film role as a 1st Air Cavalry pilot in Francis Ford Coppola's Apocalypse Now.

Eight years later, Ermey was cast in Full Metal Jacket, using his experience as a drill instructor to improvise most of his lines. The rest, as they say, is history:

But Ermey's legacy extends far beyond his iconic roles. ” He has meant so much to so many people,” Rogin told Task & Purpose in a statement. “And, it is extremely difficult to truly quantify all of the great things this man has selflessly, done for, and on behalf of, our many men and women in uniform.”

This is a developing story and will be updated with more details.