A new Top Gun movie is happening, whether you want it to or not. For my part, if Tom Cruise … Continued 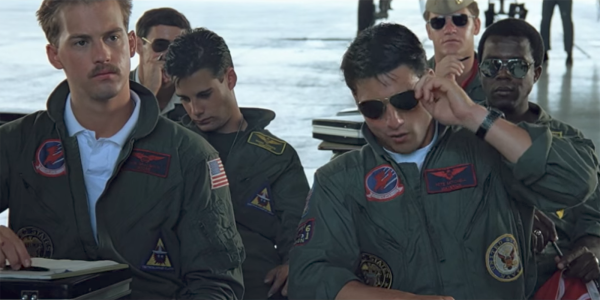 A new Top Gun movie is happening, whether you want it to or not. For my part, if Tom Cruise says he’s getting back into the cockpit, I’ll drag myself to the theater out of morbid curiosity.

But it’s not the 1980s anymore. The military has changed drastically since the days of the Cold War, and Maverick is going to have to keep up with the way we do things in the service today. Here are a couple of possible speed bumps — or plot points! — on former Lt. Pete Mitchell’s road to advancement.

1986 was a long time ago — especially for the naval service’s tailhookers, who had to wrestle with some gender-respect issues in the years after Maverick first felt the need for speed.

Top Gun: go ahead and follow that woman into the bathroom, pilot. It's endearing and definitely not harassment. #fuckthe80s

Mav seems like the kind of senior officer who zones out in sexual harassment training. Maybe his top marks in “professional expertise” and “tactical performance” have offset all those 2.0s in “command climate” on his fitreps over the years. But how long before Pete Mitchell’s lost that loving feeling and gained that Article 32 hearing? Then again, maybe the whole plot of “Top Gun 2” revolves around Maverick trying to make it to retirement before an investigation into his boorishness wallops him.

Man, how cool were all those F-14s blazing over the California desert in the original movie, their hot-dogging pilots buddied up with backseat radar-intercept officers for maximum movie banter? Too bad the Navy’s main air-superiority platform was retired in 2006. Now the service has its F-35 “joint strike fighter,” which is basically the Poochie of carrier air ops.

Can’t wait for Top Gun 2 where Tom Cruise is a lobbyist for the F-35 program. https://t.co/96Rumzxrhs

The F-35 has been a constant debacle that still randomly catches fire sometimes. Nevertheless, in “Top Gun 2,” Maverick and company will probably end up flying the first combat missions in these single-seat money-suckers (assuming those gold-plated jets can maintain a “safe threshold” of failure rates).

Let’s just imagine that every time Mav’s squadronmates fly, they finish their sorties, punch out of their dying F-35s, and putter around the ocean, waiting for a helo to pluck them out. Let’s say everyone treats this as perfectly normal operations and pays no attention when Maverick and his wingman — Did Goose conceive a son before he died? Just sayin’ — are debriefing that last close air-support run over Raqqa while floating in an emergency raft in the middle of the ocean.

3. Episode II: Attack of The Drones

You know what could have saved Goose? Juking and jiving on a remote-control stick in a conex box in the Nevada desert instead of flaming out thousands of feet above it. Picture “Top Gun 2” as a retelling of John Henry’s legend with UAVs instead of steam hammers. In the name of jointness, the entire movie takes place at Nellis Air Force Base, where Maverick is red-teaming and always talking smack on the lead drone pilot, a paunchy guy in his mid-30s who just wants to get home to the wife and kids. Eventually their commander tells them to settle it in the skies.

Because of a massive shift in funding priorities during the war on terror, the drone pilots have been getting countless hours in the sky, while Maverick’s constantly grounded over safety stand-downs and fuel costs. Maverick, nearly 60 at this point, eventually loses embarrassingly and puts in a package to become a Spirit Airlines pilot.

If you haven’t read up on it, America is currently dealing with a pilot shortage, both in the military and the civilian sector. While it’s not as bad as the troop shortages we were running up against during the surge years in Iraq and Afghanistan, desperate measures may have to be taken.

Maverick, one step away from retirement, is stop-lossed and put in charge of the new pilot recruits. Because of the shortage, recruitment standards have been relaxed to a point where nearly anyone can get wings of gold. Top Gun remains the best of the best, but Maverick is still trying to keep up with a ragtag bunch of millennial pilots, half of whom want company equity and flex time, and another half of whom have drinking problems and a death wish. Original, right?

It’s impossible to think of “Top Gun” and not recall the weirdly placed, shirtless volleyball scene in the middle of the movie.

In 2017, we still have an oiled-up Maverick and Iceman, but now they’re playing shuffleboard and talking about how difficult it is to pee. Eventually they retire together and open a bait shop in Texas.

the only Top Gun sequel I want's about them all getting together for a gay Air Force romcom wedding post-DADT repealhttps://t.co/UxOQnQeyIi