A little over a month ago, I made the journey of a lifetime that I never really knew if I … Continued 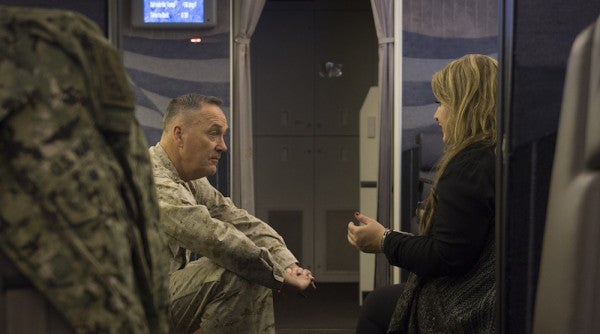 A little over a month ago, I made the journey of a lifetime that I never really knew if I would actually get to take. I had hope, and I had faith, but I didn't know if it would actually happen. After all, it had never been done before. It was such a dream come true that I am still processing it, I think my mind still feels as if it was just that — a dream.

On Sept. 9, 2011, my world was ripped apart and then crushed into pieces when my husband, Spc. Christopher Horton, was killed in action in Paktia, Afghanistan, by small arms fire. Since Chris’s death, there has been no greater wish or desire in my heart than to go to Afghanistan. And I went. Writing those words still feels unbelievable to me. I went, and it was one of the best times of my life. While anticipating the trip, I honestly didn't know how I would handle it although I am quite familiar with my own resolve. I didn't know how going to the country where my husband breathed his last breath, said his last word, and bled his last ounce of blood would affect me. I felt as if I would be meeting a part of me that I've never met before and never knew existed.

There are myriad reasons why I wanted to go, and not ones that most would expect. I did not want to go to Afghanistan for closure, but more to see the land that my husband gave everything for in the fight against terrorism; to show that even though he was killed, terrorism did not and will not win, and the American spirit will never die. Explaining fully why I wanted to go is nearly impossible to put into words, but Chris was not the only one who died that day. I died too. We died. Our hopes, dreams, life, and future died. As I slowly rebuild this crushed life of mine, and proudly and humbly carry Chris’s legacy and life on my shoulders, I wanted to get closer to his last moments. I wanted to put my feet firmly on the soil in Afghanistan, and in my own way, show Chris’s strength and spirit. Show the unbreakable spirit of America, the resilience of free people who are unafraid.

After years of work in the veterans and survivors arena, the chairman of the Joint Chiefs of Staff, Gen. Joseph Dunford, took me with him as special assistant and ombudsman to the troops — a job I couldn't have dreamed up if I tried. I was so honored to meet with our servicemen and women, to find out their concerns and praises and report back to the general. I experienced a level of joy and peace while in Afghanistan that I haven't felt in my entire life.

I felt as if I traced my husband's footsteps while flying through Shannon, Ireland, and then landing in Afghanistan. I have always wanted to know every detail, every experience he had, and get as close to his last days as possible. Somehow, I felt closer to him. I savored each experience, wondering what it was like for him. I was filled with awe that I was able to experience in a very small way what he did. Until the plane ride home.

As I sat in my comfy seat next to some of the greatest service members in our entire military, I traced Chris's deployment in my mind and my heart sank. My mind wandered back to that day. The day my husband was killed, when his body was carefully packed into a metal casket and delicately draped in the American flag. The day he took his last military flight home.

A little over four and half years ago, the anticipation in my heart was so strong, I could barely breathe. It was one of the few times I could hear my heart pounding. I was dressed in a beautiful black lace dress with my hair freshly curled and what was left of my makeup as tears rolled down my face. I wanted to look my best for my husband despite the fact that I hadn't slept in two days. My eyes were bloodshot, and the world around me was spinning. My world was spinning, spinning, spinning.

The excitement that I would finally see my husband again, after four months away from each other — four months without his voice, his touch, and his smile — was so intense. I felt like my emotions were as volatile as a hurricane trapped inside a mason jar, yet at the same time I felt such a supernatural peace.

How could I be so excited to see him again, especially when he was coming home in this way? This can't be happening; he's on his way home. I had missed him so much. He's almost back where he belongs, in the country he gave everything for, the country he died for.

My sister, Chris’s parents, Chris’s best friend, and I traveled to Dover Air Force Base, Delaware, to watch Chris’s body come back to America from Afghanistan on Sept. 11, 2011. How ironic that it also happened to be the tenthanniversary of 9/11, and here we were welcoming Chris back home in a metal box covered with the American flag after he was killed fighting the war that began that day.

As we flew through the Alps on our way back to Washington, D.C., my mind flashed back to the night of Chris's dignified transfer. Lightning started to strike and we had to wait for it to wane before the transfers could continue. We waited from 11 p.m. until 4 a.m. in the lounge until they finally resumed flights, and it was finally our turn to line up and get back on the bus.

I breathed slowly as we pulled up to the flight line, trying to control my tears and emotions with every ounce of my being. Never in my life have I felt so many emotions running through my veins. Never in my life have I been so tested to see what I am really made of. As I stepped off of the bus, there he was. It was a dark, rainy night, and emotions I never knew I had went through my body as I slowly walked the flight line and took my seat. How could Chris be in that box? How could that be? That can’t be him. I just talked to him three days ago. I kept replaying the scenario in my head over and over again: Chris getting shot in the head and being in that cold metal box, alone.

As they slowly lowered the lift Chris was on, I felt like someone punched me in the stomach with a steel fist. I couldn't breathe. The only thing I wanted to do is run up and hug the casket. I wanted to get close to Chris, to comfort him, to make him okay, to fix everything for him. I needed to touch that casket. But I couldn’t. As the six soldiers picked him up in unison and walked him to that plain, white truck to load his body, I felt my life, my dreams, and my heart shatter like a glass vase on a concrete floor. I felt such sadness and horror for Chris. I felt limp. I felt helpless. I wanted to make it better, to tell Chris I loved him, but he was gone.

Knowing Chris was home in the country he loved was one of the biggest reliefs I have ever felt. He was back where he belonged: On American soil, the land that he fought, bled and died for. But, he wasn't alive.

Related: A post-9/11 widow honors Katherine McFarland who lost her husband and his brothers in World War II »

On my way home from Afghanistan, the scene played out in my head over and over again. As much as it hurts to remember, these are the times I never want to forget because these are the moments that define me, that have made me who I am, and have tested me to my very core. And as strange as it sounds, they were my last moments with my husband.

Almost five years later, I continue to carry our story and live life with Chris's spirit inspiring me every step of the way.

So I took it for him.

That was one of the hardest flights I have ever taken, but one I needed to take. As my mind tries to process going to Afghanistan, one thing I know for sure, my husband may have died, but his eternal courage, valor, and fearlessness will live on, in me.