I can’t help but think about a wonderful couple I met during a recent book signing in San Antonio, Texas.... 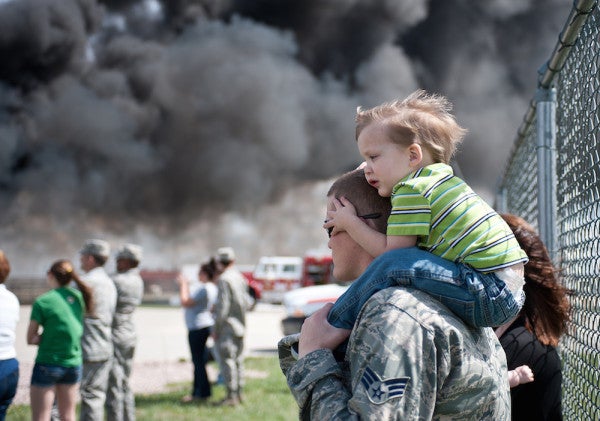 I can’t help but think about a wonderful couple I met during a recent book signing in San Antonio, Texas. I can’t shake Oren and Gloria’s story. To me, it perfectly illustrates why our military personnel and their families deserve our respect. Theirs is a simple story — nothing like the death-defying accounts of bravery on the battlefield in my book “Valor” — but it reveals another kind of heroism that should also give us pause.

A picture of Oren his wife Gloria, and their daughters taken within an hour of Oren’s return from his deployment to Afghanistan.

Oren, a lieutenant colonel in the Air Force, was deployed to Afghanistan in 2013, when his wife Gloria was due to deliver their third child. He told me that he could have attempted to coordinate a trip home for the birth, but chose not to. “Why not?!” I asked incredulously. As the father of two young boys, I can hardly imagine missing their birth. Nor can I image the doghouse I would still be in with my lovely wife if I had chosen not to be at the hospital with her.

Oren just shrugged his shoulders and said that it didn’t feel right when some junior airman in the same situation could not. It also didn’t sit well to leave others to do his job, while he went home — even if it were for a compelling reason like the birth of a child.

So, instead of being physically present, Oren “participated” in the delivery via FaceTime on his personal computer.

As Oren shared this story with me, Gloria watched with a knowing smile. It seems that she doesn’t pass up many opportunities to remind Oren that he missed the birth of their child, but at this point, it is more in jest than resentment. As Oren learned, “virtual” attendance apparently does not qualify as actual attendance.

Small moments like these reveal so much. Oren chose to sacrifice a special, irreplaceable moment with his family because he believed it would have been unfair to all those serving with him and would have placed a greater burden on his unit during his absence. That decision illustrates to me the selflessness and commitment of our military personnel. It also shows their quiet leadership – Oren made that decision from his own sense of fairness with no expectation of fanfare or recognition; in fact, it’s not clear that the airmen within the command would ever know that he might have been able to travel home for the birth.

Beyond Oren’s self-sacrifice, I also found Gloria’s response to be uplifting. Although she didn’t necessarily like her husband’s decision, Gloria understood it. She faced some tough times as a result — caring for an infant and two older girls by herself was undoubtedly exhausting and stressful, but she muddled through. In fact, she told me after my book talk that hearing about the dire circumstances facing the heroes in “Valor” gave her perspective and made her own struggles seem manageable.

To me, Gloria embodies the spirit of the American military family. Despite the overwhelming burdens placed on them, they don’t complain, they don’t resent, and they don’t give in to the seduction of a woe-is-me mindset. They understand. They cope. They power through.

To get a sense of just how remarkable their dedication is, do this mental experiment: Can you imagine a civilian telling his wife that he decided to miss the birth of a child because he wanted to be fair to his co-workers? And that the wife didn’t divorce him?

That is what makes our military families different.