Military spouse unemployment is a serious problem for the 641,639 people who are married to active-duty service members. Nearly half … Continued 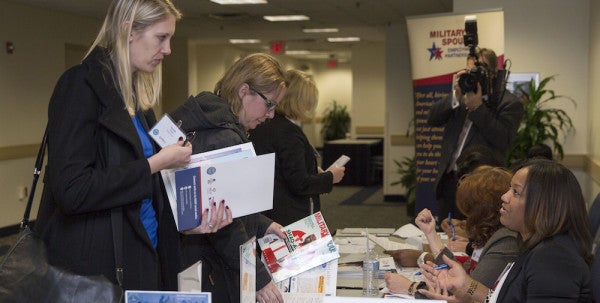 Military spouse unemployment is a serious problem for the 641,639 people who are married to active-duty service members. Nearly half of those significant others are unemployed, according to a new study by the U.S. Chamber of Commerce released on June 14.

In a survey of 1,273 spouses of active-duty service members, the Chamber found that a whopping 92% of them are women, and 52% are in the job market — but they are not happy with the situation. Only 38% work full time, with the other 14% working just part time or seasonal jobs.

Technically, however, only 10% are considered unemployed by the Bureau of Labor Statistics definition, which states you must be not working and actively seeking a job.

Still, the survey suggests 38% of spouses are out of the workforce entirely.

That has a real economic impact. The advocacy group Blue Star Families released a report in 2016 that showed military spouse unemployment could be costing the U.S. economy anywhere between $710 million and $1 billion a year.

Permanent change of station, an inevitable part of military life, plays a major role in military spouses’ inability to get jobs. Sixty-seven percent reported having to quit their jobs for their spouse’s military career, according to the Chamber.

“It’s on everybody’s minds, but you don’t really see anything changing,” Wine said.

Many of these spouses report that they don’t work in careers that match their skill level, education level, or prior salaries. The report found that 49% have completed college degrees or higher levels of education. But many are also raising kids, and 70% of their children are under age 11.

“Military spouses with degrees face the greatest challenges in nearly every measurable employment category,” according to the Chamber of Commerce release. “They face the highest rates of unemployment and the most difficulty finding meaningful work.”

At the final destination of a PCS move, many employers will not entertain job applications from military spouses because their tenure could be short-lived: Some 41% of those spouses surveyed said that this was the reason they were passed over for a job.

As a result, 44% of these spouses report that their families are living paycheck-to-paycheck, because they need a second income that simply isn’t available. And that has an impact on family morale.

“It doesn’t matter who you are or how strong your marriage is,” Wine said. “The other partner is always going to wonder: ‘What about me, what about my career?’”

Wine suggested that spouses look at the freelance market, which eliminates geography as a factor.

“I do think everyone is well-intentioned, but I don’t necessarily believe a solution is going to come from ,” Wine said. “The way the military is structured, you need to have people move. Reducing that is a good thing, but you’re never going to be able to get rid of it.”

Advocacy groups and nonprofits alike are working to fill the gaps where DoD is unable to provide solutions, but their impact has not been measured. For now, the prospects for spouses seeking jobs remain fairly grim.