What Life Is Really Like When A Parent Deploys

As a military brat, you often are born into a world where you move constantly, experience long parental absences, and … Continued 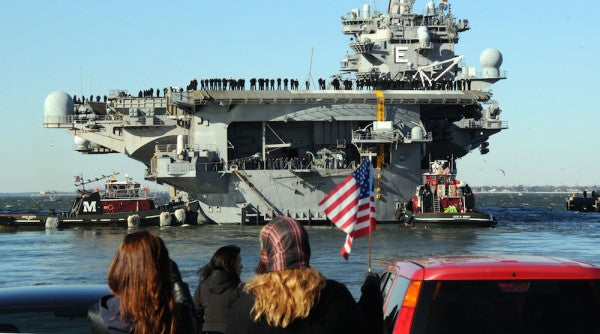 As a military brat, you often are born into a world where you move constantly, experience long parental absences, and are forced to grow up a little faster than most kids.

Learning to get through the day while a parent deploys is like adjusting to a new normal — not necessarily bad, just different. One parent tries to fill the roles of two people. Rules get broken to make life easier. Where you used to have family dinners at the table every night, now you eat pizza in your parents’ bed while watching movies — at least, that’s how it was for my family.

My dad was a Navy pilot. I didn’t meet him until I was three months old. It was one of those “welcome back, here’s your baby” homecomings that so many military families experience. Luckily I was the exception, not the rule, and he got to be around when my younger sister and brother were born.

The hardest part of being a Navy family, I remember, was watching it wear on my mom. Seeing her handle my two demanding younger siblings made me both appreciate and respectfully fear her. She was — and still is — the boss in the best way possible. Whether it was because of the deployments or because she’s always been this way, my mom is de facto the strongest person I’ve ever known.

In our kitchen, we have this mug that says, “Navy wife is the hardest job in the Navy.” After growing up watching her minimize all the effects that deployment could have had on us, I’m inclined to agree. Essentially, she single-handedly moved us to a different house every year until I was nine. She put her career aspirations on hold to raise us and allow my dad to thrive in the Navy.

After he finished up his master’s degree at the University of Massachusetts Dartmouth in 1997, he got orders in Norfolk, Virginia. We moved just two months after my brother was born, and my dad deployed a few weeks after we got settled.

When we arrived, we had no family or close friends living nearby to lean on. My mom was alone with three kids under the age of six, so my grandmother came down from Philadelphia to help when she could. My sister, who was the epitome of a “daddy’s little girl,” was three, and this was her first deployment. She couldn’t understand why he was gone. I felt his absence more in the form of fear. I worried all the time that he wouldn’t come back. Six months feels like an eternity when you are that young.

For the first few weeks of every deployment there was this lingering feeling of loneliness. We all slept in my mom’s bed, and she slept with a ratty t-shirt sprayed with my dad’s cologne under her pillow.

We came up with family projects and planned outings to keep busy all the time. Distractions in the form of long walks around the local mall and getting pretzels or having intricate tea parties were the ways that we chose to cope with deployment; and while the activities vary from family to family, I guarantee every military family had or has their own unique set of rituals.

Though things become easier — more normal as time goes by — the feeling that something is missing never really subsides.

One of the more defining aspects of living with a parent who constantly deploys is that you spend your entire childhood on tape. I was born on camera. Every special occasion, major milestone, school play, awkward growth spurt, and sports match I ever participated in is documented on VHS tapes.

In the first grade, I lost my first tooth. Instead of running to show my dad, my mom pulled out the video camera and told me to “tell dad about it.” So there I was standing in the kitchen, wearing a flowy blue dress, holding my tooth up to the lens still bleeding, excitedly explaining that I was going to get my first visit from the tooth fairy.

But it wasn’t just big life events that were taped. Sometimes the camera would roll while my mom mundanely folded the laundry and talked about her day, or she’d set it on the counter as we baked cookies to send overseas to him. These moments, archived on VHS tapes, are still sitting on a shelf in my parents’ living room, now a testament to how we survived my dad’s many deployments.

When I was seven, we had a Charlie Brown Christmas tree. It was too much work to care for a real tree with a first-grader, a preschooler, and a newborn. It was one of many holidays we spent as a family of four instead of five.

I remember it as being mostly hard, but I have fond memories too.

Every so often the doorbell would ring and a UPS man would have a package. Sometimes the battered boxes, which traveled hundreds if not thousands of miles, would contain ornate hats from Spain, dresses from Israel, or fruity chocolates from Italy. But what we really lived for were the videos.

For Christmas one year, my dad sent a fantastic, dramatic reading of “The Night Before Christmas,” but he had changed the characters in the story to our family members, our pets, and the house in the story was instead ours. My sister and I probably watched that tape a hundred times. I still laugh when I think about it today.

Granted, it was different in the 1990s and early 2000s than it is now. During those tours, our lives revolved around when my dad could call. Before the mass proliferation of the internet, I recall getting to talk to him maybe once a month — just for a few minutes. Sometimes we’d get emails too, but considering the time, it was rare.

Though we struggled living in Norfolk at first, it turned out to be a blessing as time went on. Home to the world’s biggest Navy base, the city was full of other military families who knew exactly what we were going through. After being there a few years, we were able to rely on and be relied on by neighbors and friends who also had relatives deployed.

I don’t know how it was for people outside my family, but life during deployments shaped my entire personality. I taught myself to read, braid my own hair, fold my clothes, and make my lunches by the time I was eight. It made me fiercely independent — sometimes in a good way, but other times to a fault. Having my dad deploy often put things in perspective, and I never went through one of those phases where I really hated my parents, because I respected the hell out of them for going through what they did to ensure that I had as normal a childhood as possible.

When a parent deploys, it invariably affects everyone in your family in some way or another. Sometimes I can’t comprehend how we got through the rougher parts, but we did. As strange as it sounds though, I appreciate being raised as a Navy brat and wouldn’t trade it for anything.