What has two wings and doesn’t give a fuck? The peregrine falcon: the fastest member of the animal kingdom, preternaturally... 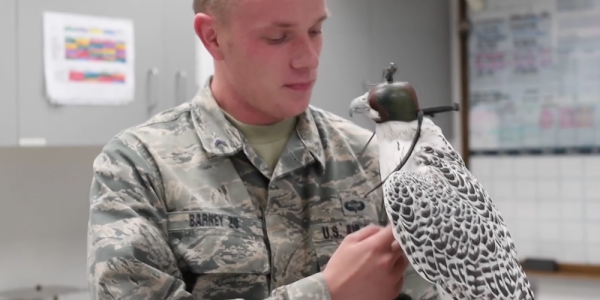 What has two wings and doesn’t give a fuck? The peregrine falcon: the fastest member of the animal kingdom, preternaturally terrifying bird of prey… and, now, the natural enemy of unmanned aerial vehicles. The Air Force is into putting falcons to work for the U.S. armed forces — and new research suggests they’re smart to do so: The peregrine falcon may hold the key to developing anti-drone interceptor systems.

The research, conducted by a group of Air Force-funded researchers at Oxford University and published in the Proceedings of the National Academy of Sciences, consisted of letting GPS-outfitted falcons go to pound-town on drone-mounted dummy targets to observe the birds’ interception behaviors. They found that, on the hunt, falcons operate “in a similar way to most guided missiles,” according to Oxford zoologist and chief investigator Graham Taylor.

To wit: The birds follow attack trajectories based on line-of-sight, despite the absence of conventional targeting information on a target's speed or distance. As Bloomberg points out, it would appear that one of nature’s most ruthless hunters subscribes to the same “proportional navigation“ principles as the rotating steering window that defined the earliest iterations of the heat-seeking AIM-9 Sidewinder.

“Our GPS tracks and onboard videos show how peregrine falcons intercept moving targets that don't want to be caught,” Taylor said in an announcement. “Our next step is to apply this research to designing a new kind of visually guided drone, able to remove rogue drones safely from the vicinity of airports, prisons, and other no-fly zones.”

Sure, great, neat: But does this mean that the peregrine’s only future as a fighting falcon is informing the missiles mounted to the side of an actual Fighting Falcon? Probably — but maybe not, according to these brief clips of Oxford’s test falcons rocking the living shit out of their targets:

Why not? The bird of prey has proved a worthy warfighting companion for centuries. The practice of falconry dates back more than 4,000 years to the dawn of modern civilization, with the falcon’s training so critical during the Medieval era that, per Popular Science, various statutes across Europe “mention fines for the theft or killing of someone else's hawk.” Warlords rode into combat on battlefields from England to Mongolia with falcons (and falconers) at their side, until the advent of gunpowder all but banished the raptors from the battlefield.

In recent years, the falcon and other birds of prey have proven attractivecountermeasures among law enforcement agencies for swarms of increasingly ubiquitous drones blotting out the skies. In 2016, the Dutch police invited raptor-training company Guard From Above to explore the deployment of majestic birds of prey against potentially dangerous drones.

Related: Watch The World’s Most Majestic Bird Of Prey Lay Waste To A Drone »

It’s not the worst idea: Civilian drones have begun to invade the last untouched enclaves of the animal kingdom; in 2014, the National Park Service banned moron tourists from flying disasters in national parks. And eagles and falcons are increasingly attacking intrusive drones they see as natural threats, with fascinating results:

OK, yes, falcons aren’t the best UAV countermeasure, especially since the Department of Defense on Aug. 17 deemed conventional gunfire an appropriate response to commercial or private drones that enter the airspace at more than 130 facilities across the country. But base security won’t always be there: Just consider the illegally operated civilian drone that collided with a UH-60 Black Hawk helicopter flown by Fort Bragg soldiers over Staten Island in September.

Despite this, the potential applications of these angry birds to drone warfare are considerable. As the researchers write, the proportional navigation guidance system at play in falcon behavior is “optimized for low flight speeds could find use in small, visually guided drones designed to remove other drones from protected airspace” — perfect medium-range solutions for the rising tide of ISIS suicide drones that have plagued troops downrange in recent months.

But if the Pentagon does decide to deploy badass birds of prey downrange, let’s be real: They better be fucking bald eagles, symbols of American badassery — and don’t even think about naming them “Redwing.”