Nuclear deterrence, the U.S. military ace card that hasn’t been played much since the U.S.S.R. collapsed in a heap, is... 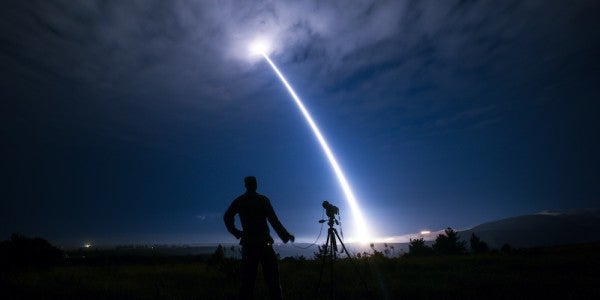 Nuclear deterrence, the U.S. military ace card that hasn’t been played much since the U.S.S.R. collapsed in a heap, is a hot item again. President Donald Trump remains locked in a months-long war of words with North Korean dictator Kim Jong Un over the country’s nuclear program, raising the anxiety over global nuclear war to its highest levels since 1983’s WarGames spurred presidential action (really). The Pentagon is considering returning to a 24-hour “strip alert” for nuclear-capable bombers for the first time since the end of the Cold War. And on Nov. 14, the Senate Foreign Relations Committee took a long, hard look at the commander-in-chief’s nuclear launch authority in light of Trump’s unusual first year in office.

Despite this flurry of activity at the highest levels of the U.S. military establishment, the Air Force is doing its duty when it comes to strategic deterrence — namely, keeping America’s nuclear missiles ready to fly at a moment’s notice. In a new episode of Air Force TV’s flagship “Blue” program, airmen describe how they regularly maintain the 500 LGM-30 Minuteman III intercontinental ballistic missiles that, scattered across the U.S., comprise one of the service branch’s two legs of the nuclear triad. And the video is — something else.

Five years “before the missile is ever launched,” the Air Force pulls a random Minuteman ICBM for a “test launch” at Vandenberg Air Force Base in California. (Don’t worry, the nuclear warhead travels separately):

Before the ICBM leaves its home base, Air Force personnel conduct an inspection of the transporter erector launcher (TEL) truck that’s used to actually transport the missile:

Upon arrival at Vandenberg, the TEL is actually erected…

…and the Minuteman is hoisted down into a test silo, where other Air Force personnel will fully assemble the ICBM:

A month later, the ICBM is test-fired at the Kwajalein Atoll in the Pacific, some 4,000 miles away while Air Force personnel gather data on the process, from the initial key-turning to impact:

Fascinating stuff, but I prefer my nuclear ICBM exercises with a side of marijuana small-talk:

You can watch the entire Air Force video below: