The Company Behind The AK-47 Is Now Building Unmanned Tanks

Mikhail Kalashnikov, the poor farmer who became the a legendary weapons designer, left a deadly mark on the art of... 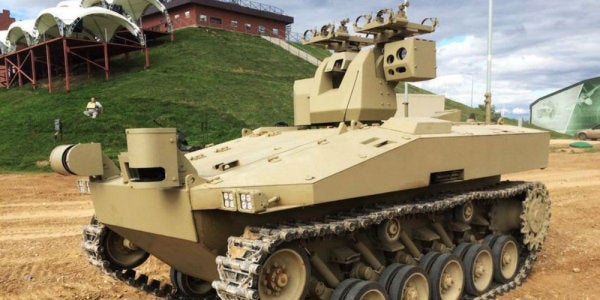 Mikhail Kalashnikov, the poor farmer who became the a legendary weapons designer, left a deadly mark on the art of war. Revered in the Soviet Union for developing the ultra-reliable AK-47, his fame spread beyond Russia as the improbably godfather for the ubiquitous semi-automatic rifle favored by militaries, militias, and insurgents around the world. Millions of his Kalashnikovs have seen battle in almost every active theater since World War II.

Though he died in 2013, Kalashnikov’s name remains synonymous with the future of warfare — though not because of his titular rifle. Popular Mechanics reports that Kalashnikov Concern, the weapons manufacturer named for the AK inventor, is working on an “unmanned combat ground vehicle.” Here are the details, per PopMech:

Kalashnikov currently markets the 7-ton BAS-01G Soratnik (“Comrade-in-Arms”) combat vehicle. The vehicle, which looks like a miniature tank, is designed to support infantry with a Kalashinov PKTM machine gun and up to eight Kornet-EM anti-tank missiles. The Soratnik has a top speed of 25 miles, can operate at ranges of up to six miles, and can operate with a degree of autonomy.

Here’s a video of the “Comrade-in-Arms” in action:

To be clear: One of the most infamous public-private weapons makers on the planet, named for the man who invented what’s likely the most popular hand-held killing machine in human history, is developing armored murder-bots.

I think we all know how this is going to end: