This Drone Helicopter Could Revolutionize The Medevac Forever

The U.S. military may have found itself the aerial ambulance of its dreams. Since 2016, the Army’s Medical Research and... 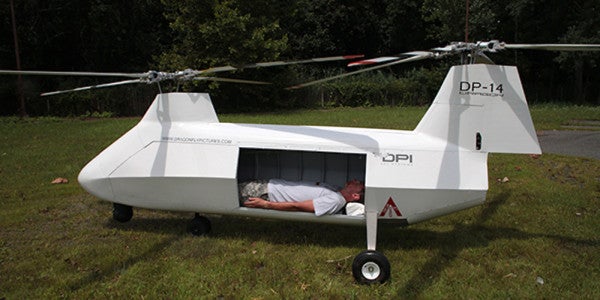 The U.S. military may have found itself the aerial ambulance of its dreams. Since 2016, the Army’s Medical Research and Materiel Command has examined the potential applications of unmanned aerial drones in assisting combat troops on the battlefield, and when it comes to facilitating a quick and relatively safe medical evacuation, Dragonfly Pictures’ DP-14 Hawk is just what the doctor ordered.

The DP-14 Hawk isn’t just small, it’s also fast and agile, making it perfect not just for resupply missions but for ferrying wounded troops out of hard-to-reach landing zones. With a top speed of 105 knots and a rapid climb rate of 500 feet per minute, the Hawk can maintain a cruising speed of more than 80 mph for more than two hours — even when fully loaded with just over 400 pounds of cargo in its 6-foot-by-20-inch, human-friendly cargo area. As The Drive points out, the Hawk even resembles a miniaturized version of the CH-47 Chinook helicopter favored for rapid-troop deployments.

What the DP-14 Hawk lacks in carrying capacity, it makes up for in precision. The little beast’s state-of-the-art LIDAR (Light Detection And Ranging) system uses 3D laser scanning and mapping tech to continually map its surroundings, allowing the Hawk to “fly intelligent autonomous, NLOS, nap-of-earth missions and dynamically adapt to changes in flight conditions and terrain.” According to DPI:

Because it is an autonomous VTOL UAV, no runway or recovery equipment is required. With its small profile, the Hawk can self-launch and self-land at unprepared sites, including small clearings, fallow fields, icy roads, and challenging terrain, including its own transport (such as a utility trailer). With all-terrain landing gear, the Hawk can also take off and land on any uneven ground and slopes up to 15º, as well as on heaving, rolling, pitching ships. This makes the Hawk ideal for operations such as precision agriculture, farming, wildfire life & safety, search and rescue, survey and expedition resupply, marine operations, and other applications where precision flight, precision cargo drops, and a small profile are key capabilities.

The DP-14 Hawk is depicted carrying camelback loads and sling load. In the left-hand illustration, one operator can control multiple UAVs for simultaneous missions. In the right-hand illustration, additional intelligence adds cooperative lift for larger loads.Photo by Dragonfly Pictures

This isn’t the first time the military has experimented with aerial extractions, and The Drive’s story about the DP-14 Hawk contains some fascinating history of such attempts. But based on DPI’s specs, the Hawk seems like the safest and most efficient possible iteration of the concept yet.

It definitely looks better than a “Skyhook.”