Beretta Is Trying To Take Over The Military Sidearm Space

Italian firearms manufacturer Beretta announced an updated version of the M9 pistol in December, as the final submission deadline for … Continued 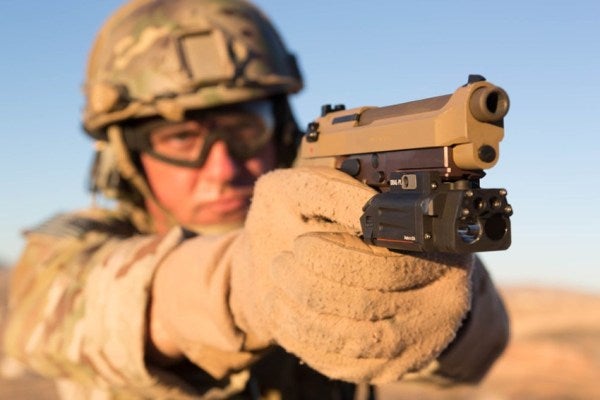 Italian firearms manufacturer Beretta announced an updated version of the M9 pistol in December, as the final submission deadline for a joint Army-Air Force competition called the Modular Handgun System approaches. The program is intended to find a replacement for the 30-year-old M9 design. Beretta’s update is called the M9A3, and features improved sights, an accessory rail, a tan finish, a slimmed down grip, and a new 17-round magazine, among other improvements. Beretta states that parts from older M9s will remain compatible with the new version, and that they can convert the current five-year order for M9s to M9A3s. The new gun will also work with current holsters and other pistol accessories currently in use. Beretta is banking on these attributes to ensure that it continues to build pistols for the American military, and bypass the Modular Handgun System program altogether by submitting the M9A3 as an engineering change proposal to the existing M9 contract.

The M9A3 will have to beat out some stiff competition, though. Smith & Wesson and General Dynamics have partnered together to offer a version of the former’s M&P service pistol, and entries from major handgun manufacturers like SIG Sauer and Glock are expected as well. Glock handguns are popular with U.S. special operations units, are used by over 60% of American law enforcement agencies, and arm numerous foreign militaries and police forces. SIG’s pistols are also popular worldwide, and the SIG P226, which lost to the M9 in 1985, is now the sidearm of choice of Naval Special Warfare units. The entry from Smith & Wesson and the possible entries from SIG and Glock are all polymer-constructed and striker-fired handguns, features that enhance reliability and save weight over the steel double-action design of the M9.

The new M9A3 will also have to battle a controversial reputation; a Center for Naval Analyses study from 2006 indicated that the M9 had the lowest levels of confidence, reliability, and overall satisfaction of any U.S. small arm among troops. The M9 design is also tied to the limits of 9mm “ball” ammunition. Hollow-point ammo improves the terminal ballistics of 9mm bullets, but the U.S. has abided by the rules set by the Hague Conventions of 1899 and 1907, despite never ratifying the sections of the treaty that prohibited the use of “bullets which expand or flatten easily in the human body.” Competitors’ entries are offered in multiple calibers, which may be an advantage if the military decides to switch away from 9mm as the Modular Hand System program evolves.

The Modular Handgun System program is the third attempt in the past decade to find a replacement for the M9; the Joint Combat Pistol and follow-up Combat Pistol programs were both suspended. With the current uncertainty about defense spending swirling, the military may decide that it’s not worth spending money on what amounts to a back-up weapon system, and stick with the original M9, which would suit Beretta just fine.