You can fuck up a refrigerator, but sometimes the fridge fucks back. That’s the gist of the ultra-brief, ultra-dangerous target... 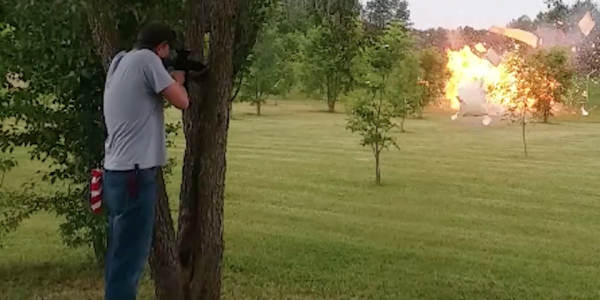 You can fuck up a refrigerator, but sometimes the fridge fucks back.

That’s the gist of the ultra-brief, ultra-dangerous target practice video that went viral after Avery Ball shared it on his Facebook page on June 4. It depicts a shooter firing on an old refrigerator packed with explosives — and barely escaping with his life:

It’s unclear what kind and quantity of explosive were in this fridge. Guns.com suggests that it’s “binary target marking compound” use for gun demonstrations, which suggests Tannerite. (Ball did not immediately respond to inquiries from Task & Purpose).

For comparison, here’s half a pound of Tannerite in a fridge at close range:

Either way, this … is not smart. Even Texas Machine Gun & Ordnance, which shared Ball’s original video, noted the next trigger-happy taxpayer who goes to war with explosives-laden home appliances won’t get away as unscathed as the shooter in this clip.

“If you are using a low-explosive like Tannerite, it is still not something to be a dumbass with. Just because it isn't something sexy like high-explosives, doesn't mean it won't assist Darwin in culling the shallow end of the gene pool,” the Spring, Texas, gun shop wrote in a June 5 Facebook post. “Stand-off distance is your friend when dealing with any explosive.”

Any guesses as to what’s happening in this video? Let us know in the comments.