The Notorious JSF Just Got Mo’ Money — And Mo’ Problems

The Department of Defense announced that it plans on shelling out an estimated $5.57 billion to purchase 74 additional F-35... 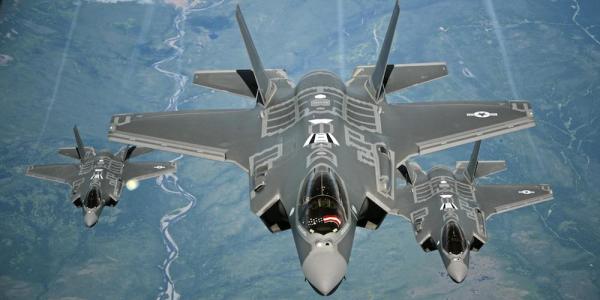 The Department of Defense announced that it plans on shelling out an estimated $5.57 billion to purchase 74 additional F-35 Joint Strike Fighters from defense contractor Lockheed Martin, the Washington Post reported on July 10 — an exasperating add-on purchase resulting from yet another slew of cost overruns and mechanical problems in the controversial fighter jet.

Don’t worry, though — the Pentagon has everything under control. “The F-35 program remains within all cost, schedule and performance thresholds and continues to make steady progress,” Vice Adm. Mat Winter, executive officer of the branch’s F-35 program, told Breaking Defense in a statement on July 10. Winter added that his office was “aggressively pursuing affordability opportunities… to further drive down total program costs now and in the future.”

There’s a problem with Winter’s statement: It’s not totally true.

The purchase announcement came the same day that the Pentagon acknowledged total acquisition costs for the F-35 may jump by 7%, from $379 billion to $406.5 billion, according to Bloomberg — a surprise increase. (The F-35 is already the single most expensive military program in DoD history — and represents nearly a quarter of Lockheed’s revenue each year, according to the Post.

Related: 7 Ways The F-35 Stealth Fighter Will Literally Take Your Breath Away»

Speaking to Oriana Pawlyk at Military.com, Winter claimed the sudden cost increase was a consequence of the Navy’s reduction in its annual buy rate, a decision that ended up expanding procurement costs across the program. But Winter’s explanation doesn’t mean the F-35 won’t see extreme cost overruns.

In April, a Government Accountability Office report projected a five-month delay and cost increase of $1.7 billion to actually wrap up development of the DoD’s F-35 program, owing to a spate of technical problems with arresting gear, heads-up displays, and even life-support systems that have popped up in the aircraft.

Indeed, new reports of ongoing mechanical failures emerged in the week immediately following the DoD’s July 10 F-35 procurement announcement. The eagerness among Pentagon buyers to expand procurement programs despite these problems should make you nervous.

The first problem is our familiar suffocating mistress, hypoxia. Following a protracted stand-down of F-35A flights out of Luke Air Force Base, a crack team of DoD and Lockheed experts found “no specific root cause” for oxygen-supply problems in the cockpits — a shrug that the Air Force took as a sign to resume flights without actually waiting to locate the problem.

Related: The F-35 Is Getting Closer And Closer To Combat»

Efforts to address the potentially lethal issue, which the Air Force and Navy have known about since at least 2011, are also stymied by bureaucratic red tape, according to a Senate Armed Services Committee report release on July 11. “While a lot of good work was being done and data being created and analyzed, those efforts are not always being effectively communicated down to the flightline, where the dangers … are most acute,” the committee observed, according to Bloomberg, expressing concern “that no solutions have been found at the same time that recent events indicate the situation may be getting worse.”

The increased hypoxia worries were followed almost immediately by engine concerns. On July 12, an Accident Investigation Board report revealed that a September 23, 2016, engine fire in a Luke AFB F-35A stationed at Mountain Home Air Force Base in Idaho was caused by, in Military.com’s words, “strong winds.” The report said tailwind “forced hot air into the inlet of the Integrated Power Pack,” immediately triggering an engine fire — a phenomenon that the F-35A community only had “vague awareness” of, according to Military.com.

The last major F-35 engine fire occurred at Eglin Air Force Base in 2014, grounding the Joint Strike Fighter just weeks before its inaugural international flight at London’s Farnborough Air Show. Though Air Force officials told Military.com they don’t see the tailwinds at issue in the Eglin AFB fire, that incident still conjured worries regarding the increasingly troubled fighter. In retrospect, the Air Force’s move to cancel the F-35’s alternative engine program that presented an “essential and stabilizing element of a program that was already viewed as extremely high-risk” as Tyler Rogaway smartly observed after the Eglin fire seems foolhardy

Bureaucrats, man: The more money they come across, the more problems they see.