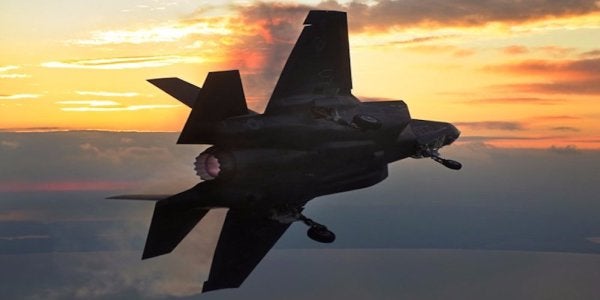 Retired U.S. Marine Corps Maj. Dan Flatley will never forget the crushing feeling of helplessness he felt the first time he faced a stealth jet while he was flying in an F/A-18.

“I remember indelibly the moment in which the AWAC (airborne early warning and control plane) called out to me that there was a Raptor in front of me at very close range that made me uncomfortable,” Flatley told Business Insider in a phone interview.

“I had no way of targeting him, no way of defending myself.”

Despite years of training to stay focused and level headed under the extreme pressures of air-to-air combat, a sense of dread set in.

Before even seeing the F-22, Flatley had already surrendered his composure, and therefore his ability to effectively fight back.

Years later, Flatley would come to pilot the F-35 and even design the curriculum for training pilots in the fifth-generation fighter, where he would tap into the crushing psychological effect of fighting a plane you can't find.

While the F-35 represents the most expensive weapons system of all time and is a frequent target of government critics who chastise the program for going over budget and schedule, Flatley says the real strength of stealth fighters doesn't show up in any budget.

“What the public doesn’t realize is how dominant the difference in information is,” said Flatley. While the F-35 performs similarly to legacy jets in some areas like speed, turning, and range, there's a huge, ever-growing information gap between what the F-35 pilot sees and what an F-18 pilot sees.

The F-35 features six cameras stationed around the jet and a helmet display that allows pilots to literally look through the jet as if it wasn't there. It features the only infrared radar on a US fighter since the F-14, and uses unprecedented sensor-fusion capabilities to paint an incredibly vivid picture of its surroundings for miles out.

On top of all that, it's stealth. So while the F-35 sees everything, it's seen by almost no one.

Legacy jets, with the help of AWACs ” may have a general idea that there’s an F-35 out there, but they don’t know exactly where we are,” said Flatley.

The distinct information disadvantage causes pilots to get tunnel vision, according to Flatley.

“Everything they see becomes the F-35 out there,” said Flatley. “Every radar hit, every communication is about the stealth jet. They want to illuminate or eliminate a threat they can’t handle.”

The fear and paranoia caused by the presence of stealth jets in a battle have a widespread effect on adversaries that ” includes extremely capable legacy jets and certainly includes everything available to adversaries,” said Flatley of updated F-16s, F-15s, and even enemy air defenses like Russia's S-400.

Even extremely capable operators fall prey to the F-35's psychological advantage. “It has nothing to do with their skill or technology. They’re at such a technological disadvantage,” said Flatley. “I've seen guys in F-18s turn directly in front of me and show me their tails cause they have no idea I’m there.”

In the end, “It aggregates to a completely inept response to what we’re doing in the air,” said Flatley. “People are so hellbent on shooting down the stealth fighter that they invariably make mistakes that I can exploit.”