On Monday, FN America unveiled its new striker-fired 9mm handgun. Showcasing the pistol ahead of next week's NRA Show in … Continued 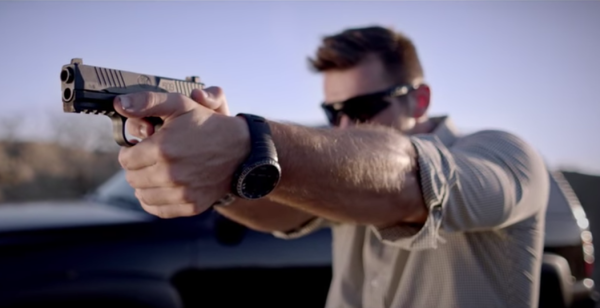 On Monday, FN America unveiled its new striker-fired 9mm handgun. Showcasing the pistol ahead of next week's NRA Show in Atlanta, Georgia, the new FN 509 is based on FN's unsuccessful Modular Handgun System entry.

Several other MHS competitors have already entered the civilian market, including the Smith & Wesson M&P 2.0, the Ruger American, Beretta APX, and Remington's RP9. The SIG Sauer P320 has been available commercially since 2014. Now FN appears set to enter the market next month.

The FN 509 is not the exact design that was submitted to the U.S. Army for testing. Instead the MHS pistol was used as the basis for the 509, which underwent further refinement. Specifically, the 509 no longer has a frame-mounted manual safety, which was part of the MHS specification. In a press release announcing the new pistol, FN America said: “we have worked with law enforcement agencies throughout the U.S. and captured on-site feedback that we used to further optimize the pistol…”

The 509 builds on FN's earlier striker-fired pistol, the FNS Compact, but with a larger full-size polymer frame and changes to the grip profile, slide profile, and slide serrations, as well as changes to the weapon's internals to improve reliability. While the base model 509 does not have a manual safety, FN advised that a manual safety model will be available in the future.

The new pistol's controls are fully ambidextrous with slide and magazine releases on both sides of the weapon. With an overall length of 7.4 inches and a 4-inch barrel, it is just slightly longer than the FNS Compact.

Ten or 17-round magazines are available for the FN 509; however, earlier FNS magazines do not work in the 509 unless the floor plate of the magazine is replaced. The pistol ships with two interchangeable backstraps and two magazines.

The FN 509 comes with fixed 3-dot luminescent sights while night sights are available as standard for law enforcement contracts. The 509 uses the same sight base cut-out as the popular SIG P320 and Springfield XD pistols, meaning there is already a range of aftermarket sights on the market.

FN's new pistol is launching with a manufacturer's suggested retail price of $649 in early May, meaning it’s a little more expensive than Beretta's new APX (at $575) and the Smith & Wesson (at $599), but substantially cheaper than the SIG P320.

While the 509 is made by one of the industry's most trusted manufacturers, it is entering a highly competitive marketplace already brimming with striker-fired, polymer pistols from Glock, SIG, Beretta, Smith & Wesson and a dozen other firms.

Whether it will be an attractive firearm to law enforcement remains to be seen.