Happy Monday! If you're stuck at the office hating life, here's a video of some aerial badassery to break up... 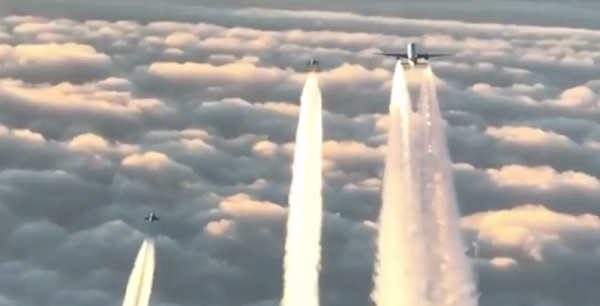 Happy Monday! If you're stuck at the office hating life, here's a video of some aerial badassery to break up the monotony.

On February 16, a commercial Boeing 777 jet operating on India’s Jet Airways went silent over Cologne, Germany as it was flying from Mumbai to London with 330 passengers on board. Not wanting to risk having a rogue jet cruising its airspace, German air traffic controllers quickly worked to mobilize two military Typhoon fighter jets with the German Air Force to assess the situation.

According to unconfirmed information, a British Airways passenger captured the daring feat on video:

Luckily, the aircraft were able to pull up next to the 777 as the crew reestablished ground communications. The Aviationist reported authorities determined the reason for the communication failure after a thorough investigation:

The reason for the incident was a perception and/or ergonomic error when the flight was handed off from air traffic controllers in Bratislava to Prague Center ATC. Normally controllers will tell an airline pilot “Contact Prague Center ATC on frequency 132 decimal 89. Good day.”

Then the crew makes the radio frequency change manually.

If the crew makes an error dialing in the frequency correctly, normally done on the center radio console by rotating an indexed knob with a corresponding digital display, or they mis-quote the radio frequency- or both- then they may inadvertently arrive on the incorrect radio channel.

The airline reported that communication was restored just as the fighter jets were deployed, and that they went up and performed a side-by-side check more as a precautionary measure. The aircraft — Eurofighter Typhoon — is a multi-role fighter with air-to-ground capabilities, used primarily for dogfight scenarios. The German Air Force has deployed them since 2003, and they are currently flown by three of its Tactical Air Wings.

We’re shocked we just found this footage trending three months later, but when it comes to watching the muscular Typhoon fighter jet in action, it’s better late than never.