What Happened At SHOT Show

The annual 2017 SHOT Show in Las Vegas, Nevada, is done and over. In its wake are a whole slew … Continued 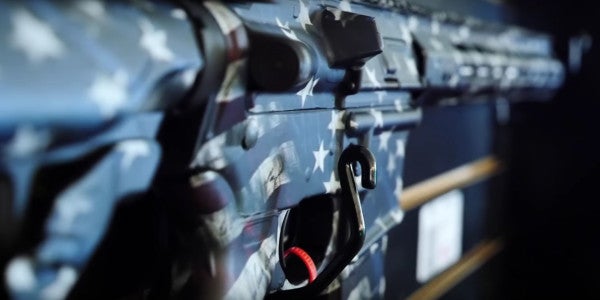 The annual 2017 SHOT Show in Las Vegas, Nevada, is done and over. In its wake are a whole slew of new guns, tactical and hunting gear, and other related items shown to the public for the first time, soon to be for sale at a gun store near you. Here’s some of the best on released at SHOT.

Suppressors are officially a big thing, as more and more gun owners opt to pay the $200 tax and perform the background check necessary to make their guns a little more quiet. The gun industry has high hopes that the Hearing Protection Act of 2017 will pass a Republican-backed Congress and get the signoff from President Donald Trump’s pen, making suppressors as easy to buy as rifles. Advanced Armament Corporation showed off their new Ti-Rant suppressors, which, you guessed it, are made with titanium and 7075 aluminum. Industry leader SilencerCo unveiled new cans for 2017, and their new Maxim 9 pistol, the first handgun with a built-in suppressor available to the public in recent memory.

Savage Arms also unveiled two similar rifles chambered in .308 Winchester and 6.5-millimeter Creedmore, the MSR-Hunter for hunters and MSR-Long Range for aspiring snipers. Finally, Colt hit the floor with a throwback, a $2,500 reproduction of the 1960s-era M16A1. (Semi-auto only, of course.)

American icon Remington unveiled the RP9, a polymer striker-fired pistol. The RP9 has a generous 18 round magazine and is chambered in nine millimeter. Handgun manufacturers Kimber and Springfield Armory both came out with new versions of their 1911 pattern handguns. Finally, the U.S. Army has picked its new handgun to replace the ‘80s-era Beretta M9, the Sig Sauer P320.

All-things-polymer wizards Magpul celebrated ten years of the PMAG, their line of ammunition magazines that took the AR world by storm. The company, fresh off the U.S. Marine Corps endorsement of the Gen 3 Windowed PMAG for official use, showed off an exhibit of early PMAG prototypes. It also showed off a takedown version of its X-22 Hunter stock, a new Zhukov handguard for AK-47 clones, and a new Gen 3 stock for precision rifles.

2017 was also the year gun gear manufacturers released new gear for women, considered the fastest growing gun owner demographic in America. Gear maker Concealed Carrie, whose tagline is “Firearms * Fashion * Fabulous” introduced its line of handbags, satchels, and briefcases that for women and men that carry their guns with them every day. Guns.com had a look at female-specific gear including discrete holsters, blinged-out ear protection, backpacks with a tactical style, and a new hunting camouflauge pattern for women called “Alpine.” On the zero carb side, Web site Tactical Fanboy reports that Central Missouri Machine Gun Inc.–also known as CMMG–showed of its new “Tac Snac” at the show. Tac Snac is a “meat snack stick” made of beef and pork and, as the packaging says, is “perfect for camping, hiking, zombie standoffs and end of the world scenarios.”

Finally in the superhero department, Beretta USA presented an “Incredible Hulk”-themed handgun to actor Lou Ferrigno, who played the green guy on the 80s television show of the same name. The company took one of its PX4 Storm 9-millimeter handguns, gave it a bright green lower receiver, and engraved “HULK” into the slide. According to Guns.com, “The gun was presented to Ferrigno on Thursday in a specially made stainless steel ammo can with a fist indentation in the side.”