In January, the Army began officially testing the Chevy Colorado ZH2, the first ground-mobility combat vehicle that, if fielded, would... 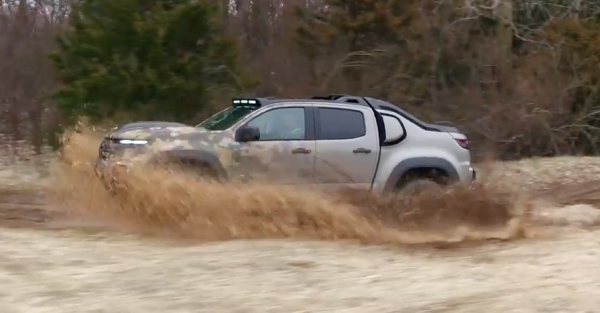 In January, the Army began officially testing the Chevy Colorado ZH2, the first ground-mobility combat vehicle that, if fielded, would be powered by a revolutionary new hydrogen fuel cell. The result of a $4 million collaboration between GM and the U.S. Army Tank Automotive Research, Development, and Engineering Center (TARDEC), a functional hydrogen fuel cell would mean a greatly diminished heat signature and near-silent electric power system, making the ZH2 not just a more efficient pickup for military operations, but a strategically valuable asset downrange. Less noise means less exposure, which means less risk of showing up on enemy scopes.

Hydrogen fuel cells have long been an object of skepticism for engineers and designers, but after months of development, the ZH2 is finally getting the testing it deserves. In early April, GM shipped a prototype ZH2 to its proving ground in Milford, Michigan, to give the muscular new pickup the off-road test it deserves — a test you can (partially) observe, thanks to this brief video from Trucks.com:

“The vehicle can power through … unimpeded by the terrain, and you’re doing it efficiently,” GM Global Fuel Cell Activities director Charlie Freese told Trucks.com. “We’re doing it with more than twice the efficiency of the internal combustion engine.”

The military has been testing hydrogen fuel cells in ground vehicles for more than two decades, and TARDEC field-tested the experimental fuel cells in two Ford Escape SUVs as recently as 2009. But with GM’s Milford tests complete, the company is officially handing over the ZH2 to TARDEC for another round of evaluations by military personnel.

The Chevrolet ZH2.Photo via General Motors

“What we’re doing through this effort is understanding the full potential of the technology,” said TARDEC director Dr. Paul Rogers told Autoweek. “As you can see here, in this form, it’s phenomenal. Now what we want to do is take a look at the military utility of it.”

Here’s what that ‘utility’ will probably look like, as Marty Skovlund Jr. reported for Task & Purpose in January:

The ZH2 also integrates an Exportable Power Take Off (EPTO) unit — basically, a generator. This will allow soldiers to bring power to areas where it is not readily available, like remote combat outposts (COPs), or allow a reconnaissance element to stay in their observation post (OP) longer while keeping their communications and surveillance equipment operational. This could lend a game-changing capability to military units, whether they are in a city that had its power knocked out from airstrikes, or patrolling on the steep back roads of the K-G Pass in Afghanistan.

It should be noted that, because of its compact design, the ZH2 would not be a total replacement for the MRAP or Stryker, both of which are capable of carrying squad-sized elements. Judging by the concept photos, the ZH2 appears to be capable of carrying four soldiers in full kit, with one additional soldier as a top gunner. The first thing that comes to mind for such a configuration is that it would be a perfect fit for the type of mounted reconnaissance conducted by U.S. Army’s cavalry scouts.

It’s unclear when the ZH2 would actually hit the battlefield with U.S. troops in tow. When the Army first unveiled the collaboration with GM in October 2016, officials stated that evaluations would “take place over the course of a year” with soldiers from Fort Benning, Georgia; Fort Bragg, North Carolina; and Fort Carson, Colorado. But should all go according to plan, the ZH2 could open the floodgates for further applications of hydrogen fuel cells in the field.