The modern submarine is not a simple machine. A loss of propulsion, unexpected flooding, or trouble with reactors or weapons... 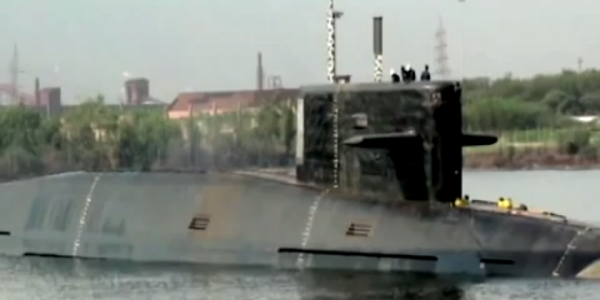 The modern submarine is not a simple machine. A loss of propulsion, unexpected flooding, or trouble with reactors or weapons can doom a sub crew to a watery grave.

Also, it’s a good idea to, like, close the hatches before you dive.

Call it a lesson learned for the Indian navy, which managed to put the country’s first nuclear-missile submarine, the $2.9 billion INS Arihant, out of commission in the most boneheaded way possible.

The Hindu reported yesterday that the Arihant has been out of commission since suffering “major damage” some 10 months ago, due to what a navy source characterized as a “human error” — to wit: allowing water to flood to sub’s propulsion compartment after failing to secure one of the vessel’s external hatches.

Water “rushed in as a hatch on the rear side was left open by mistake while was at harbor” in February 2017, shortly after the submarine’s launch, The Hindu reports. Since then, the sub “has been undergoing repairs and clean up,” according to the paper: “Besides other repair work, many pipes had to be cut open and replaced.”

It’s hard to articulate how major a fuck-up this is, but Kyle Mizokami does a good job at Popular Mechanics: Indian authorities ordered the pipe replacement because they “likely felt that pipes exposed to corrosive seawater couldn't be trusted again, particularly pipes that carry pressurized water coolant to and from the ship’s 83 megawatt nuclear reactor.” For context, a submarine assigned to Britain’s Royal Navy narrowly avoided a complete reactor meltdown in 2012 after the power sources for its coolant system failed.

The incident is also quite an embarrassment — and strategic concern — for the Indian Armed Forces. A Russian Akula-class attack sub modified to accommodate a variety of ballistic missiles, the Arihant represented a major advance in India’s nuclear triad after its completion in October 2016. (India in 1974 became the 6th country to conduct a successful nuclear test.) Indeed, the Arihant’s ability to deliver K-15 short-range and K-4 intermediate-range nuclear missiles was envisioned as a powerful deterrent against India’s uneasy nuclear state neighbor, Pakistan.

“Arihant is the most important platform within India’s nuclear triad covering land-air-sea modes,” the Hindu reports. Well, it’s important if it works — and it probably helps to make your submarine watertight.

This is just some sloppy, dangerous seamanship, and the Indian Navy better get its act together fast. Either that, or perhaps follow the Royal Navy’s lead and install the 2001-era Windows XP as an operating system on all your most vital vessels. That way, you can blame the blue screen of death instead of “human error” for the next critical foul-up. Although even outdated software probably knows enough to dog down on all the hatches.