Imagine you’re dropped into an active war zone, your boots on the ground, rifle over your shoulder, and your platoon... 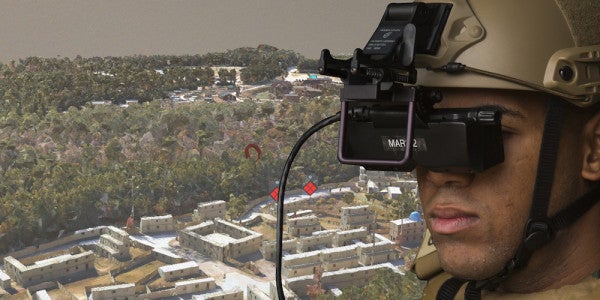 Imagine you’re dropped into an active war zone, your boots on the ground, rifle over your shoulder, and your platoon in tow. You’re on a reconnaissance mission in some unnamed desert, and you can hear gunfire erupt in the distance. You need to decide where to go, how to organize your troops, and which assets to call on for support. Everything is happening quickly, your heart is pounding, adrenaline is pumping: you need to make snap decisions, and a mistake could mean the difference between life and death.

Except you’re not really there, nor is there any real danger. Instead, you’re standing in the barracks, and all the events that sent your pulse racing are happening in virtual reality. But this is no video game: It’s the Marine Tactical Decision Kit, an augmented reality system designed to put infantry Marines through the rigors of battle without ever leaving their barracks.

On July 21, the Office of Naval Research put the new MTDK system on display at the Naval Future Force Science and Technology Expo at the Walter E. Washington National Convention Center in Washington, D.C., and Task & Purpose was lucky enough to try it out personally.

As I put on the headset, I was immediately immersed in a different world, traveling from the heart of D.C. to Camp Lejeune in North Carolina in the blink of an eye. By spinning around, I was able to see the entire base from a near bird’s-eye view — 360 degrees of it, from the grass underfoot to clouds in the sky. When I moved, the landscape shifted with me, allowing me to fully explore the grounds of the base in intricate, three-dimensional detail. It felt real.

This is how the Corps plans on training future infantry Marines to make decisions. Gen. Robert Neller, commandant of the Marine Corps, approached ONR in 2016 to see if the agency could come up get grunts more practice before their boots hit the ground. The problem, ONR program manager for Human Performance Training and Education Dr. Peter Squire told Task & Purpose, is that decision-making in combat is a learned skill that comes from repetition, but there are few opportunities for Marines to really hone that practice.

The MTDK holds the answer, using virtual reality to drop Marines into squad and platoon-level scenarios and forcing them to make tactical decisions, communicate, command, and survey their surroundings, just as they would in a real-life operational area. It’s capabilities, according to a Marine Corps release, including the ability to “conduct live and virtual tactical decision games, develop graphic-based orders, mission plan in augmented reality, and … brief, execute and debrief live missions,”

The MTDK isn’t just the product of the Navy’s technological imagination, but a practical tool as well. Due to budget constraints, Marines are spending less and less time in the field during training, but that doesn’t mean they’re not being prepared for combat. Thanks to the ONR, Marines are now getting extensive training without ever having to leave the confines of a classroom thanks to the tactical decision kit.

“Our goal is not really changing the fundamentals for tactics, but hopefully supplementing and accelerating the learning process,” Squire said. “There are gaps within the Marine Corps learning process. Marines within a battalion get one opportunity to go out in the field. You don’t get another shot.”

As a result, the main uses in training are mission planning and rehearsal, Squire said. Previously, simulations were all two-dimensional, stripping away a visual element of combat training, and slowing the learning process. The kit allows Marines to essentially see an entire field as if it were real, comprehend tactics through repetition, apply strategy, and engage in real-time teaming under similar conditions.

“Among their many capabilities, the tactical decision kits literally bring training to where warfighters live,” Warren Duffie, who heads up public affairs at ONR, told Task & Purpose in an email. “The kits are designed to be employed in barracks ‘decision rooms,’ where Marines can practice and compete in tactical decision-making on a routine basis.”

And one thing it does that field training doesn’t provide is instant replay. Marines can watch themselves in action, as though they are NFL players critiquing their plays after a game. Once a mission is completed, Marines and their commanders can watch what they did, see an array of possible actions, learn from mistakes, and figure out how to correct their processes in future VR missions.

“You can also use it in a debrief mode,” Squire said. “We want to give a quick way that they can look back at what happened in an event, and continue to go back and learn from those activities.”

All 24 Marine infantry battalions will be outfitted with the kits by October, Squire told Task & Purpose. Eight kits have already been distributed, with plans to dole out four kits each month until then.

While the tactical decision kits still have more developments in the pipeline for eager Marines, the Department of Defense is very excited about their potential applications across the services. Squire told Task & Purpose that the Army has expressed interest in adapting the technology since the first kits hit Marines battalions in May.

The interest makes sense: Outside a training capacity, the tactical decision kit may have other uses downrange. The mission planning aspect allows troops to gain an understanding of an environment before setting foot in it, providing essential mapping for extraction plans, reconnaissance missions, or special forces operations.

Of course, no simulation comes close to being in an actual firefight, but with training toolkits like the MTDK, Marines will be more prepared than ever for combat.