ISIS fighters are flaunting a modified variant of the M14 in a newly released propaganda video detailing the terror group’s... 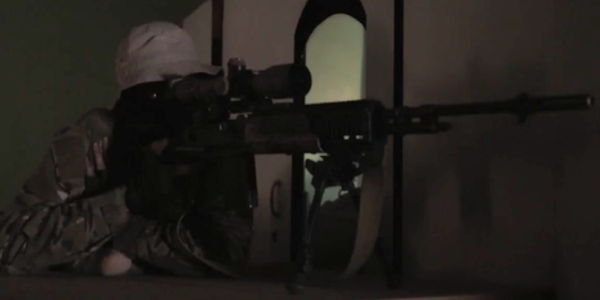 ISIS fighters are flaunting a modified variant of the M14 in a newly released propaganda video detailing the terror group’s urban warfare tactics as it makes a last stand against the U.S.-backed coalition laying siege to its Syrian stronghold of Raqqa. The video, which shows armed drones, vehicle-borne IEDs, and other unusual armament in action against Syrian Democratic Forces in the crowded thoroughfares of the city, is yet another example of U.S. military weapons and equipment ending up in the hands of militants across the battlefields of Afghanistan, Iraq, and Syria and utilized against the very Western-backed forces they were meant to strengthen.

In a Sept. 7 article in the Washington Post, reporter and Marine veteran Thomas Gibbons-Neff identified several heavily armed ISIS snipers outfitted with the 7.62mm Mk 14 Enhanced Battle Rifle, featured “prominently” in a 38-minute highlight reel of the group’s defense of Raqqa. Initially developed after the Korean War to replace the M1 Garand, the M14 variant was developed as a go-to designated marksman rifle for troops fighting under U.S. Special Operations Command and has accompanied special operations forces and a handful of Army infantry platoons downrange during the successive invasions of Afghanistan and Iraq.

While standard-issue rifles like the M4 and M16, used by foreign fighters in the Middle East and beyond, are regular fixtures of militant arsenals alongside the Soviet-made AK-47, the appearance of the M14 is unusual given the rifle’s “age and relative rarity in the U.S. military,” as Gibbons-Neff observes. Though once standard issue during the 1950s and 60s, the rifle became considered a “boutique weapon” until the Global War on Terror made the EBR variant — laden with a “modern furnishing” of sights and scope like those featured in the Raqqa video — a weapon of choice for many squad designated marksmen.

Of course, this is not the M14’s first appearance in the region, especially amid the new flow of U.S. military personnel. As an Ares Armament Research Services report noted back in 2015, the Mk 14 appeared in the hands of ISIS militants in Iraq well before President Barack Obama initiated Operation Inherent Resolve to wage an air war against the so-called Islamic “caliphate.” The presence of U.S. arms is a mess as old as the Global War on Terror: Thanks to both post-invasion U.S. arms transfers to Iraqi security forces and ISIS’ subsequent liberation of government weapons caches, militants have their pick not just of U.S. rifles, but distinctive arms like the FGM-148 Javelin anti-tank missiles and FN SCAR rifles festooned in special operations forces gear.

But the appearance of the Mk 14 in Syria in particular highlights a particularly frustrating facet of the Pentagon’s questionable arms transfer programs. In August 2015, Ares observed the arrival of the Mk 14 among the Free Syrian Army’s 30th Infantry Division, the “Division 30” group trained and armed by the Department of Defense for combat against ISIS fighters rather than forces loyal to the regime of Bashar Al-Assad. Arming those fighters was a complete clusterfuck: In July, contingent of 54 fighters with Divison 30 were immediately attacked and captured by ISIS in Syria, likely surrendering their arsenal of EBRs in the process; another commander simply betrayed the United States and handed over half to al-Nusra, the Syrian arm of al Qaeda Division 30, commander Col. Hassan Mustafa told CBS News at the time (the DoD denied the defection as “patently false.”)

A member of the Free Syrian Army's U.S.-trained 'Divison 30' with a Mk 14 Enhanced Battle Rifle on Aug. 10, 2015Photo via Ares Armament Research Services/Twitter

The aftermath of Division 30’s botched raids into Syria should have been a cautionary tale for the Pentagon. By mid-September, only “four to five” U.S.-trained Division 30 soldiers remained on the battlefield against ISIS; the day after the DoD canceled the disastrous program at the end of the month, al-Nusra fighters flaunted their haul, including U.S.-made M240 Squad Automatic Weapons, on social media in a taunt to American military personnel.

Frustratingly, it appears as though Washington learned the wrong lessons from the Division 30 debacle. In July 2017, President Donald Trump moved to end Timber Sycamore, the CIA-administered Obama program that kicked U.S.-made weapons like the Javelin and BGM-71 TOW anti-tank missiles to Syrian rebels facing off against Assad regime forces. But Trump’s concern wasn’t just the clashes at the At Tanf garrison that threatened to draw the United States, Russian, and Syrian government into a direct conflict, but that the program was funneling weapons to “a lot of al-Qaeda.”

While Trump’s choice is correct in a vacuum, it’s somewhat moot considering the administration’s decision to arm the Syrian Kurds leading the charge against ISIS in Raqqa, a decision that all but guarantees a trickle of arms — including the EBR — into the hands of militants through both capture and corruption. And until the DoD reconsiders its inherently flawed approach to small arms transfers, the Mk 14 rifle may become the post-9/11 equivalent of the AK-47, a newfound fixture of insurgent arsenals that carries deadly consequences for the very troops it was initially designed to protect.