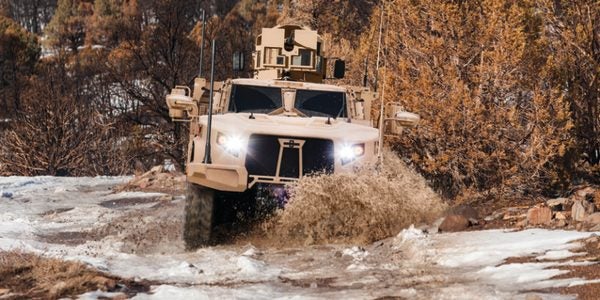 “These were three very capable commercial companies that made some decisions about how to best provide those requirements. The government tested and evaluated them, and eventually we selected what we believe is the very best value for the taxpayer,” said Army Col. Shane Fullmer, program manager for the Joint Program Office.

The JLTV will come in two variants — a two-seat utility version and a four-seat general purpose version. The two-seater has a payload of 5,100 pounds; the four-seater, 3,500 pounds.

“The Humvee will beat you up so bad,” said Peter Klema, a test technician with Oshkosh Defense, who spent 13 years in the Army as a mechanic.

“When we first developed the Humvee many years ago, it had great payload and great performance … but no protection at all,” Fullmer said.

After entering combat in Iraq and Afghanistan, “we realized we needed more side and underbody protection,” he said. “We were able to put on pretty proficient side protection, but because the way the Humvee was designed, it was very difficult to give any real, substantial level of underbody protection.”

Then came the Mine-Resistant Ambush Protected vehicles, which “gave very, very good side and underbody protection” but did not perform well in off-road conditions, Fullmer said.