Kalashnikov Concern may be known for its ubiquitous and durable AK-47 assault rifle, but the Russian defense contractor’s been cooking … Continued 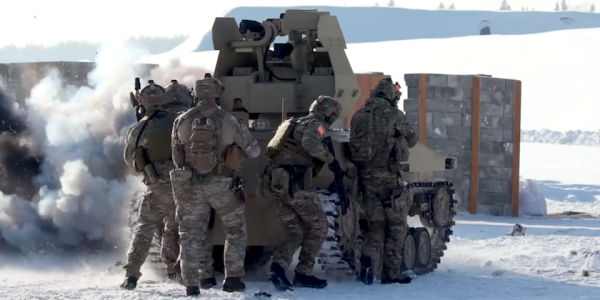 Kalashnikov Concern may be known for its ubiquitous and durable AK-47 assault rifle, but the Russian defense contractor’s been cooking up some other exciting weaponry and vehicles in recent months. A slick new handgun! A pop-up riot shield! Toy guns, even!

But the most exciting futuristic murder gadget on the legendary weapons manufacturer’s radar might be its BAS-01G Soratnik “Comrade-in-Arms,” an autonomous unmanned combat vehicle designed to tear assholes every which way — at least, according to a new sizzle reel published on March 6.

With a top speed of 25 mph and maximum range of roughly six miles, the seven-ton tank-like murderbot isn’t nearly as fast or imposing as, say, the beloved M1 Abrams. But she’s semi-autonomous — i.e. not putting living, breathing humans in harm's way — and she definitely packs a wallop beyond the 12.7mm main gun.

The video shows what looks like a 30mm AGS-17 automatic grenade launcher mounted on the Soratnik’s turret. In addition, this Death Cab For Putin has four weapons stations, offering space for armaments that include a 7.62mm machine gun, various hand-grenade launchers, and potentially up to eight Kornet-EM anti-tank missiles. That’s a whole lot of boom for one little bot.

The Soratnik isn’t a first-of-its-kind robotank: A Russian defense contractor unveiled the Uran-9 multipurpose unmanned ground combat vehicle, designed for fire support and recon operations, back in 2016; the U.S. Army was prototyping the so-called “Black Knight” semi-autonomous skull-crusher with BAE Systems way back in 2007. But to see this bad boy blowing shit up on a test range is, well, delightful — and horrifying.

There’s one big question, though: Can it Build The Wall?